Warthogs are a wild member of the pig family, found in the grasslands, savannas, and woodlands of sub-Saharan Africa. It’s length ranges from 3 to almost 5 feet and is medium-sized, as mammals of that area rank. The height from the ground to its shoulders is about 25-33.5 inches. As with most mammals, the females are smaller and lighter than the males, weighing in at about 99-165 pounds compared to the 130-330 pounds that males weigh in at. Warthogs have many characteristics, however, the most notable one is the two pairs of tusks that extend from the mouth and curve upwards. The lower pair of tusks is shorter than the upper pair, however, that doesn’t mean it’s any less threatening. Every time the warthog opens and closes its mouth, the bottom tusks rub against the upper tusks, sharpening them into razor-sharp points. The upper tusks can grow to 10 inches in length and very strong. The tusks are curved at around a right angle from the root (they can even curve more!) and they can curve backwards as they grow. Unlike some other mammals with tusks, warthogs do not use them for digging. Instead, they use them in combat when they fight other warthogs or predators. The lower set that’s razor sharp can be particularly useful in defense and attack.

Brutus is a 1 1/2 year old intact male Warthog He is super friendly and loves his belly rubbed Been our pet in our exotic facility He now needs to have a larger roaming enclosure or a wife would be nice for him. Please no hunting preserves. Call me... 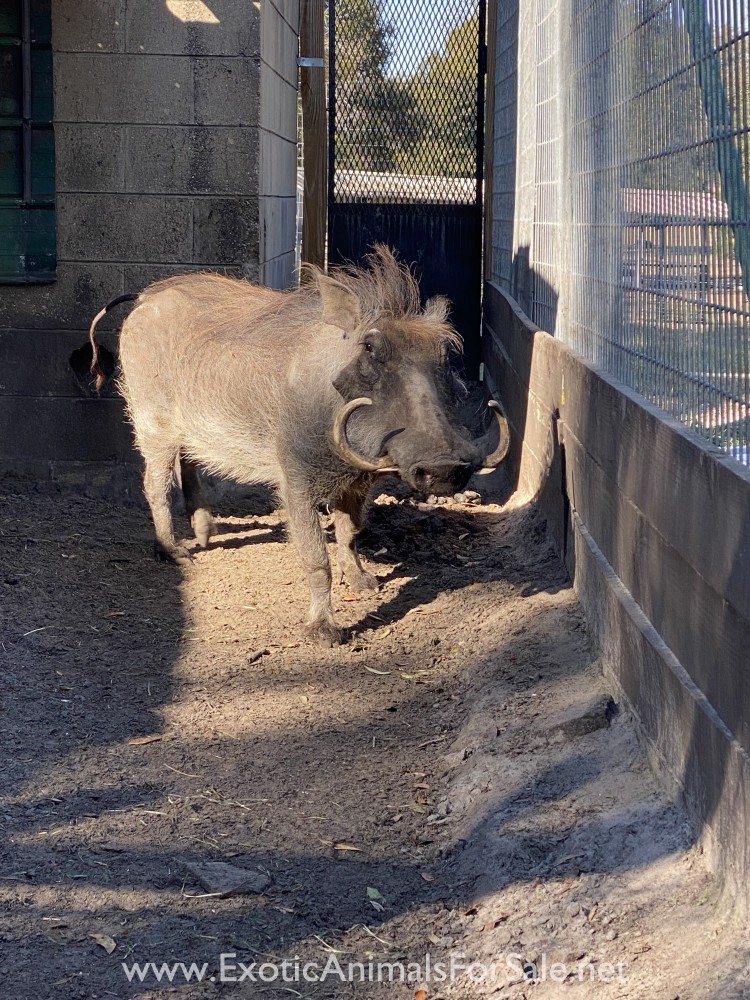 A warthog’s head is quite big and it has a mane of hair falling down the spine and stopping around the middle of the hog’s back. Even though the mane stops here, there are sparse hairs covering the rest of the body as well as a long tail with a tuft of coarse hair at the end. They are generally colored black or brown. Because they do not have much hair and they don’t have very much fat, they are easily affected by temperature changes and extreme temperatures. When the weather is too high or low, they will wallow about in mud to cope and keep their body temperatures stable and sleeping in the burrows also helps to keep them comfortable. Similar to elephant tusks, warthog tusks are often used for the tourist trade in East and South Africa as carved art pieces.

The warthog is the only pig species that grazes and lives in the savannah. As seen by their large snout, they use their sense of smell to do much of the work when locating food. Their diet can vary depending on the season and availability of different foods, however, they often eat grasses, roots, berries, bark, insects, fungi, eggs, and carrion. They harvest many of these foods through the use of their powerful digging capabilities. They do not use their tusks for digging, but rather use their snouts and feet. When they have harvested and are ready to eat, they will often bend their front feet around and move on their wrists. This does not hurt them, however. They have calloused pads on their wrists that develop before birth. Even with their powerful digging abilities, they do not create their own burrows very often. Instead, they usually sleep in abandoned burrows of other animals. An interesting fact about their sleeping habits is that they will not walk straight into a burrow to sleep. Instead, they back into the hole with their tusks facing the entrance, ready to jump out if needed.

When they fight, even though they have their powerful tusks, they will often choose to run is able. They are very fast sprinters and will often use this ability to run away in defense (they can run up to 34 miles per hour!). During the mating season, however, males will often fight each other and a female warthog will defend her piglets very aggressively if threatened. Their main predators are humans, lions, leopards, cheetahs, crocodiles, wild dogs, and hyenas; however, they have been seen to charge and wound these larger predators. They are not always aggressive, however. Sometimes, a warthog will allow a banded mongoose or vervet monkey to groom them for ticks.

There are many mammals in Africa that are very territorial, however, the warthog is not one of them They do have a home territory, however, they often live in groups called sounders. Females will often stay with their groups and the males will often leave (while still staying close). They will mark their sleeping areas, feeding areas, and waterholes but males tend to mark these places more than females. The sexes of the warthogs are able to be seen around 6-7 months old. Warthogs use their tusks for courtship and to prove status in a group. Although they are often in the same group, warthogs only breed during certain seasons while it is drier out. Mating is done in either of two ways; males seek out females and their resources and defend them or males fight for a certain female. Unlike other mammals, mothers will leave their families to give birth in a different burrow, with litters ranging from 2-8 piglets. She will stay there for several weeks before returning. If a mother has lost her piglets, she might nurse the piglets of another female. At about 2-3 weeks of age, the piglets will begin grazing and at 6 months, they are weaned. They do not leave soon after, though, staying by their mother’s side for defense.

The population of warthogs in Africa is estimated to be around 250,000. This common creature ranges in population depending on where they are located, with about 1-10 per km in protected areas and about 77 per km on shorter grass in Nakuru National Park. Because of their low tolerance to environmental changes, they are easily affected by droughts and hunting, which can decrease their population in specific areas. Even with hunting and droughts, though, they are not close to extinction, unlike many other animals in Africa. This continued life is due to the ability to adapt to their situations. In areas where they are hunted, they switch to foraging at night and in areas that are protected, they forage during early morning and evening.