The word “weasel” may be associated with treachery and deceit, but the bouncy and enthusiastic stoat has an undeniably cute appeal that is grabbing the attention of animal lovers. These tiny carnivores have a big personality, but they are still smaller than a pet ferret, making them appear to make excellent pets. This may lead to some people considering owning a pet stoat. Can stoats be pets, and if so, what are their care and requirements? 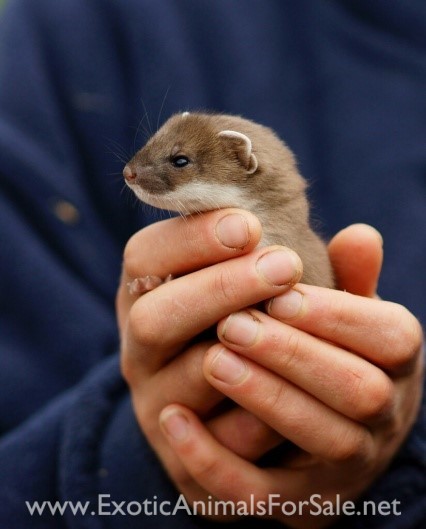 "Introducing 'Sybil'" by Peter G Trimming is licensed under CC BY 2.0

The stoat is also referred to as the short-tailed weasel or the ermine, and it has the scientific name Mustela erminea. Just like the domesticated ferrets that they somewhat resemble, they are a member of the Mustelidae family along with badgers, otters, sables, and minks. Many of these animals are opportunistically carnivorous, with many having a reputation of being relentless predators. The stoat is closely related to and resembles the least weasel (Mustela nivalis). Like mink, they climb trees and are adept swimmers [6].

Stoats measure approximately 170 to 330mm (6.69 to 13”) head to rear, with males being twice as large as females [6]. They weigh around 25 to 116 grams [6]. Stoats occur in the temperate regions of Eurasia and North America [6], but they are also a very prolific species in New Zealand which, along with the least weasel and ferret, were intentionally introduced to control the rabbit population at the end of the 19th century [5]. There, they are considered to be invasive pests and are culled regularly to aid in conservation of native bird populations [8][9]. 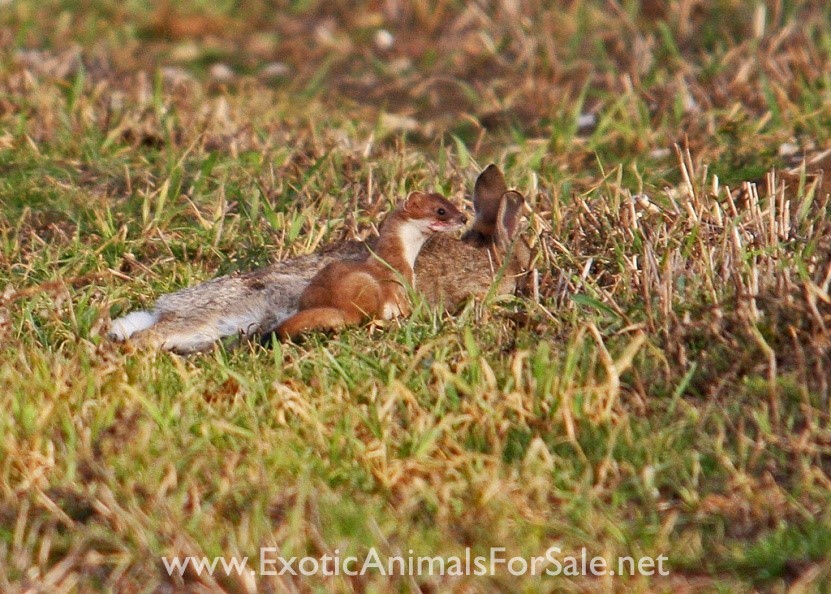 Diet of the Stoat

The food habits of stoats vary depending on the range, gender of the animal, prey density and the season; in developed areas, voles are the principal prey [2][3][ 4] and in boreal forests, deer mice are common. Other regularly taken prey included shrews, squirrels and chipmunks [2]. In Great Britain, gut analyses of the guts of stoats and least weasels consisted of 65% lagomorphs, with the rest being small rodents, birds, and eggs. Male stoats consumed more lagomorphs than females [7]. Other prey they consume are lemmings, frogs, fish, and insects [6].

Can Stoats Legally be Kept as Pets?

Stoats are legal to keep as pets in some states. They are listed as least concern by the IUCN Red List with a stable population as of 2021 [10], so they are not controlled by endangered species laws.

As stoats are naturally occurring in many parts of the United States, they are most likely illegal in most states, as prohibitions on keeping native wildlife are common. Florida would be an exception, and a stoat should be legal with a Class 3 license. 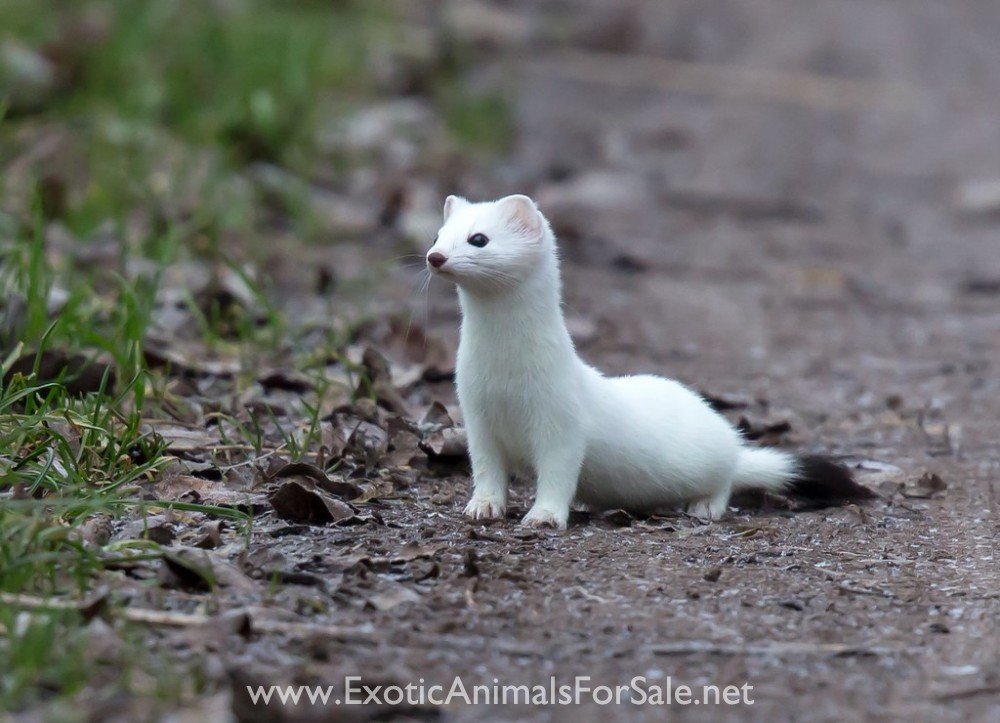 Where Can You Get a Pet Stoat?

Stoats are rarely kept as pets and are not often available to buy as a pet, if at all. There are two reasons for this.

First, stoats have relatively poor breeding success in captivity [8]. Just as is the case with mink, if the stoat were to have a presence in captivity and potentially the pet trade, it would likely be due to fur farmers having a commercial interest in propagating them, which is the origin of captive red foxes, martens, and mink.

Stoats have been traditionally hunted and valued for their fur, which turns snow white in the winter, however, they have special requirements, such as a preference for pre-killed or even live prey, and captivity-induced stress hampers their fecundity [8]. This is significant, because stoats are vigorous propagators in the wild and surprisingly, they reach sexual maturity very early and can mate as neonates. There has been one case in captivity where a 17 day old blind and helpless female stoat that was still nursing was mated successfully to eventually give birth [8][9]. 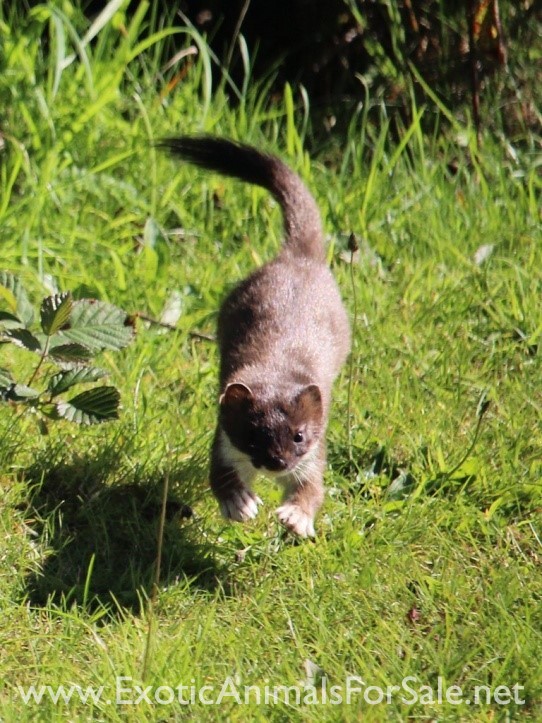 "What Happened Next - Epilogue." by Wildlife Terry is licensed under CC0 1.0

The few attempts at breeding stoats in fur farms did not yield many births, with some of the births being a result of wild-caught females carrying delayed embryos. When it comes to reproduction, stoats are unique. After mating, the fertilized embryo develops into a fluid-filled ball called a blastocyst, which stops growing and remains in the uterus for 8-9 months. This is called embryonic diapause, and it does not occur in other mustelids. The embryo resumes growing in August. Between December and September, more than 90% of wild stoats are pregnant [9].

This would be the most promising prospect for establishing a captive breeding colony [8], yet despite that it was common for nearly all captured stoats to have blastocysts present, they often did not give birth because the blastocysts did not successfully implant [9]. 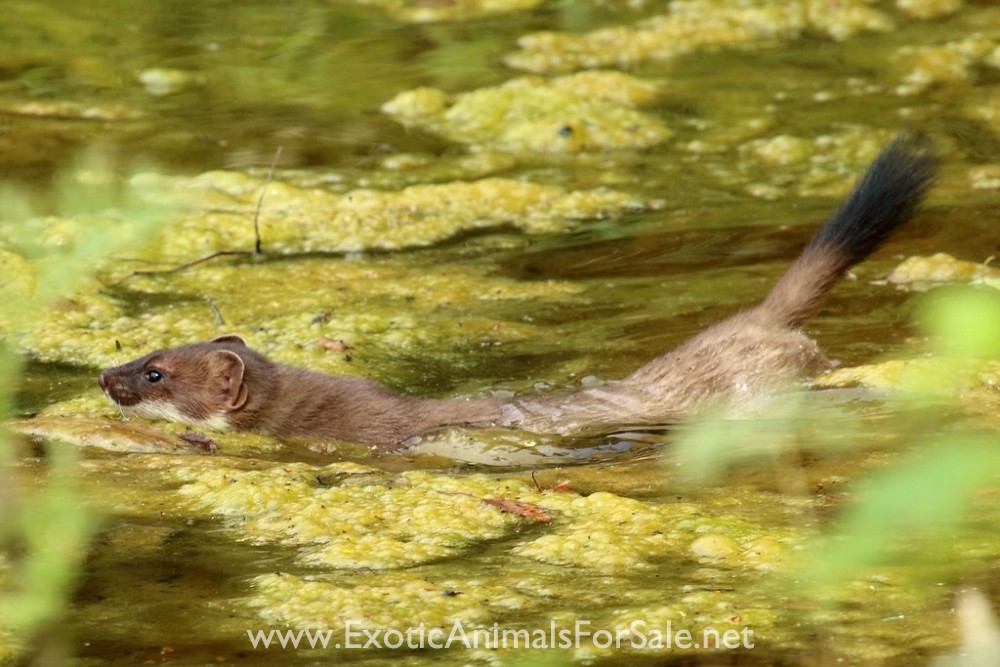 "Stoat Swimming" by Mrs Airwolfhound is licensed under CC BY-ND 2.0

In contrast, minks breed well in captivity, so the existence of that species likely removed any interest commercial fur farmers would have in breeding stoats. Intensive American mink farming began in 1925 and they remain the most important species for fur farming [8]. There are likely no commercial fur farms that raise stoats in North America [8].

Even zoos do not often display stoats possibly due to their tendency to hide frequently, and there are a low number of births in the facilities that do keep them [8]. If someone were to breed stoats, they would have the best success with captive born females [9], therefore, the presence of stoats in the pet trade is dependent on a breeder with the know-how to propagate wild-caught animals.

The other issue with stoats is their high energy levels and difficulty with taming [8]. In the wild, they can travel 15 km in one night, with males traveling through more territory than females [6]. Stoats generally fluctuate between periods of high energy and long periods of inactivity [1]. Stoats will cache leftover food to meet their energy demands [6].

Caring for Stoats in Captivity

Stoats are tiny escape artists and would likely require an aquarium spacing to contain for the average owner or cage made of material with tiny spacing. Other enclosures that have been used include cages made from 1mm gage wire, a metallic circular pen, steel weld mesh, and cages with wooden sides [8]. 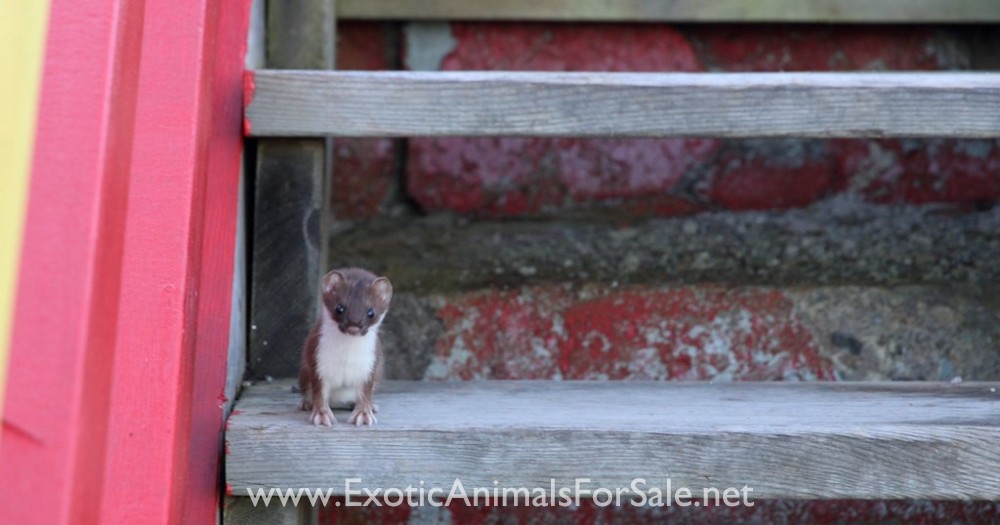 "Fort Amherst" by The Tedster is licensed under CC BY-SA 2.0

Enrichment is also imperative for stoats, and may include a pool of water to bathe in, hollow logs and pipes, vegetation, and other general features used for small active carnivores. Facilities keeping stoats in a professional setting provided nest boxes [8].

Stoats are naturally solitary and can be aggressive to conspecifics [1], therefore they should be housed alone except during breeding.

Many diets have been fed to stoats in captivity, including cat food, raw meat, live or pre-killed rodents, and other whole prey. The Minnesota Zoo had breeding success with stoats feeding them freshly killed mice. These animals were formerly fed canned cat food and did not breed on that diet.

Stoats are somewhat unusual and more difficult to care for than one might think, but if a captive breeding colony is established, their prospects for being pets can be increased. They would still be challenging pets for the typical owners used to domesticated ferret behavior. Owners experienced with or expecting the husbandry requirements of domesticated mink might prove to be better potential keepers of this species.