There are so many unusual cats that are legal (in some states) for people to own as pets in the United States, including servals, caracals, and Canadian lynxes, that it might seem as though the list of potential exotic pets people can keep in the United States is limitless. Pallas cats are unique, exceptionally fluffy, and have an unmistakable grimace that automatically gives them a “grumpy cat” personality. Can these unique creatures be kept as pets? 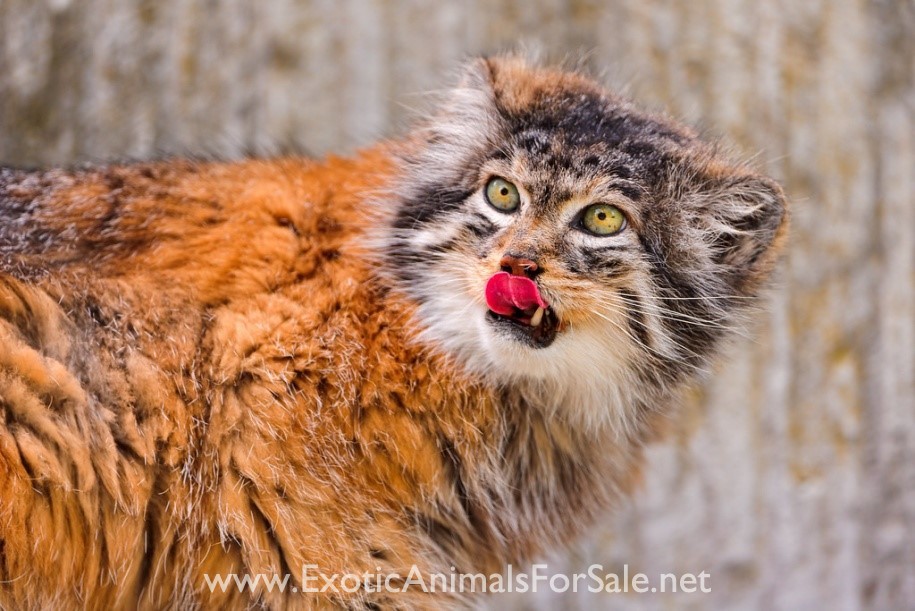 "Male Pallas cat licking his nose" by Tambako the Jaguar is licensed under CC BY-ND 2.0

What is a Pallas's Cat?

The Pallas’s cat (Otocolobus manul), also called manul, is native to the Central Asian steppes of Mongolia, China, Western Iran, and other central Asian countries. It is found in rocky environments where deep snow does not accumulate [7][8]. This cat is found at high altitudes of up to 4800 meters where there is little rainfall and low humidity [5][7]. The Pallas’s cat, named after Peter Pallas in 1776, looks larger in appearance than it actually is due to its thick coat and stocky build. In actuality, it is the same size as a large housecat [7]. When Pallas first described this unusual cat, he incorrectly believed it to be the ancestor of the Persian domestic cat [2], but it is no longer considered to share the same Genus with domestic cats (it was originally classified as (Felis manul). Still, some continue to believe that Turkish angora cats got their long-coats from hybridization with Pallas’s cats [9]. 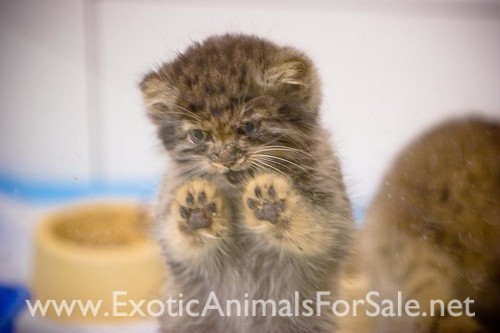 "Pallas' Cat" by kellinahandbasket is licensed under CC BY 2.0

Like other cats, Pallas’s cats are obligate carnivores and they feed mostly on rodent and small mammal prey, which mostly consists of pikas. They also consume a variety of insects, birds, reptiles, and carrion [11]. They are nocturnal and primarily solitary [7]. Unlike domesticated cats, they tend to “bark” and yelp instead of meow and growl, however they have been observed to purr [7]. Pallas’s cats, despite being widely distributed in their range, are considered to be uncommon, do not often come into contact with humans, and there is not a lot known about them, however they are listed as Least Concern by IUCN Red List as of 2020 [10]. Their population is vulnerable, however, from hunting for their fur and organs, which are used in traditional medicines, along with other threats. Also like many small animals, they are accidentally caught in traps set for larger predators like wolves [1][7][8]. 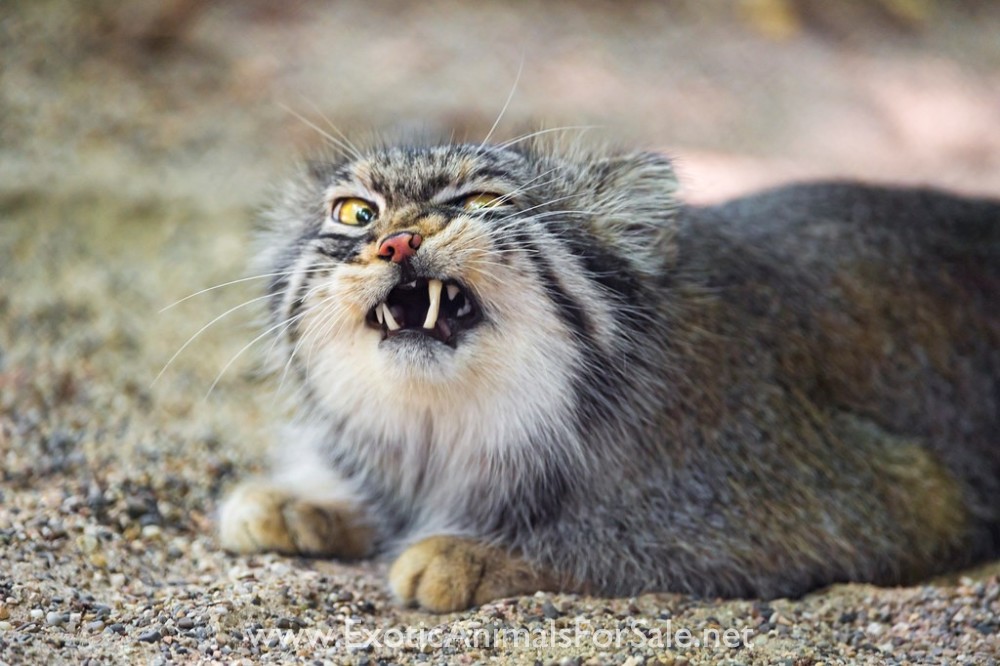 "Pallas cat looking angry" by Tambako the Jaguar is licensed under CC BY-ND 2.0

The Pallas’s Cat in Captivity

Subsequently, the Pallas’s cat is also uncommon in captive situations. In the United States as of 2020, they are not seen within the private pet trade. They are held by a small number of AZA-accredited zoos. As of 2019, there are 42 Pallas’s cats in 18 accredited AZA zoos that participate in the SSP (Species Survival Program) [13].

Pallas’s Cats are Hard to Care For

Unlike other cats, Pallas’s cats pose some unique challenges to keep and propagate in captivity. These animals have evolved for living in high altitudes and have a specially evolved immune system that is not well-equipped in dealing with the pathogens of lower altitudes [3][6][12]. Pallas’s cats do breed readily in captivity but suffer from high mortality rates because they often succumb to disease and infections. In fact, they have the highest percentage of 30 day mortality of any small cat, which is almost 45% [4].

The most common disease that affects young Pallas’s cats is toxoplasmosis, which is responsible for a 60% mortality rate of newborns [3][6]. Pallas’s cats have lived up to 11.5 years in captivity, and it is not known exactly how long they live in the wild. However, their mortality rate is also high in the wild, with 68% of kittens not making it into adulthood. The mortality rate of the adults is estimated to be 50% [5]. In 2016, the Pallas’s cat International Conservation Alliance (PICA) was founded which aims to increase the amount of research done on Pallas’s cats. 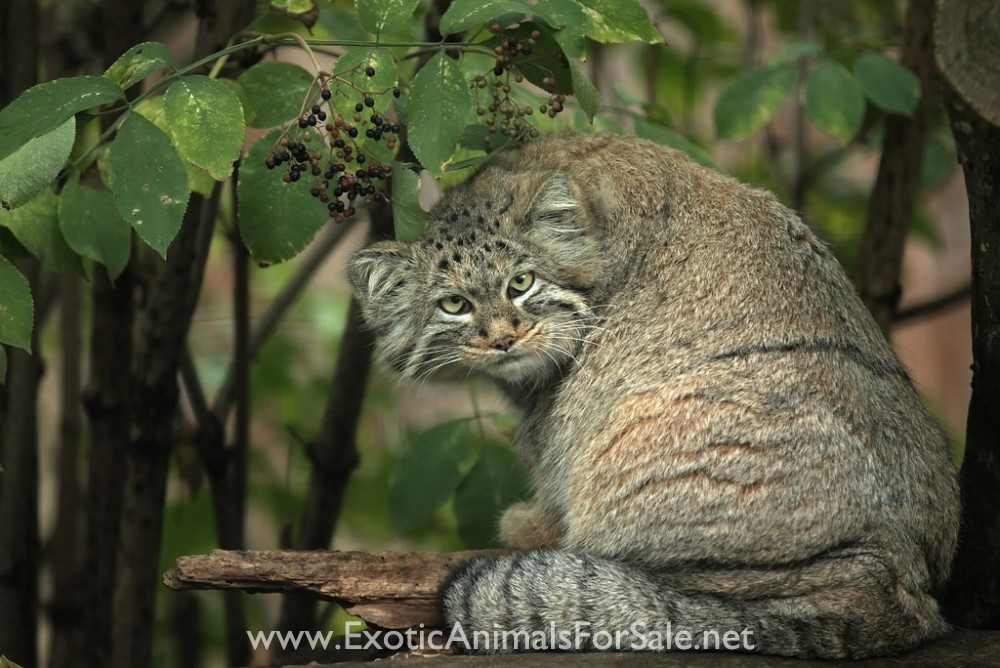 Threats in the Wild

Pallas’s cat populations are affected by anthropogenic activity, including [5]:

While this species is not seen in the pet trade in the United States and other Western countries, they are sometimes kept as pets in their native range. There is evidence that these cats are present in the fur and pet trades in Afghanistan and to a lesser extent, Pakistan, however it does not appear that they are targeted specifically and their presence is purely incidental. While the scale of the pet trade is not significant, it is somewhat common for carnivores in general to be hunted and trapped for their pelts, which are then sold in tourist attractions and gas stations. This activity is rarely regulated [1]. One Pallas’s cat that was kept as a pet was photographed in the Parachinar Valley in the Khyber Pakhtunkhwa Province, Pakistan, in March 2017 [8].

Given that Pallas’s cats are uncommon outside of their range in captivity, it is unlikely that someone would be able to import one to be owned privately outside of zoos accredited by the most respected organizations. It is not impossible, however.