Melissa A Smith Author
Are Polar Bears Kept as Pets?

A bear as a pet? It must be illegal! Well, not entirely. Within the United States as of 2020, some bears are legal to own in a very small number of states, and some people have owned bears successfully (as well as not so successfully). Most states ban bears, which are the largest member of the family Ursidae [3], but some bear species are legal, state-wise, in North Carolina, Nevada, and possibly Wisconsin. You’ll find that the vast majority of cities, however, have made owning large carnivores illegal, and those that haven’t probably just didn’t get around to making the prohibition yet because no one has attempted to keep one. Another potential loophole to owning a bear in many states is to obtain a USDA-license by starting some form of commercial operation involving the large animals.

"Whats the matter? You've never seen a Polar Bear with a pumpkin?" by ucumari photography is licensed under CC BY 2.0

Can You Own a Pet Polar Bear?

In some more rural areas, a small number of pet owners have gotten away with owning bears. Black bears are probably the most common, and even brown bears (including grizzly bears) have been privately owned. Some more exotic bears, such as sun bears and sloth bears, have also been owned privately. No one has owned the unusual panda bear, and only a small number of American zoos are lucky to have them, as they are on loan from China. But what about polar bears (Ursus maritimus)? These cold-water loving behemoths are unlikely to grace the backyard of a true “pet owner” for several reasons. 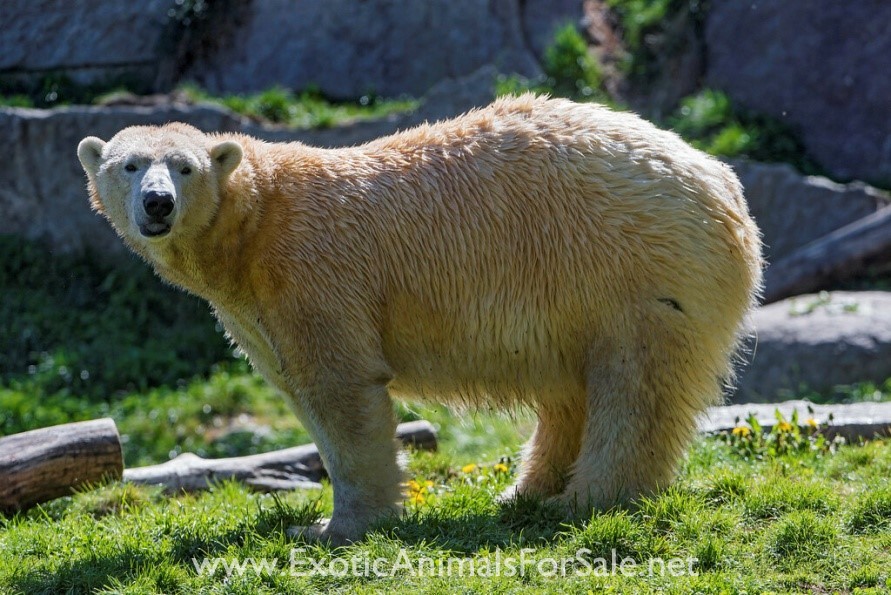 "Polar bear standing in the grass" by Tambako the Jaguar is licensed under CC BY-ND 2.0

How to Care for a Polar Bear

Obviously, there is little information on what it’s like to care for polar bears as privately-owned pets. There are many zoos that keep these bears, which are considered to be marine mammals by many [3]. Polar bears in the wild are solitary and entirely carnivorous, consuming mostly seals and a negligible amount of vegetation. They spend around 30% of their time swimming, walking, and hunting [3].

From this we can deduce that polar bears are cognitively complex and require a heavy meat-based diet. One obvious concern is temperature, given that polar bears originate from extremely cold environments. Despite coming from arctic regions, polar bears can tolerate “warm” temperatures because summers in those areas can reach up to 60’s (F) and even exceed 79F (17.8C). Despite this, zoos in warm climates that house polar bears need to provide cooler spaces for the bear using air conditioning, chilled water, cool indoor areas, and ice piles [5].

Polar bears require complex enrichment, including a pool with around a 9 foot deep end, forging opportunities, climbing, a variety of durable “toys”, movable cage furniture, diet presentation in enrichment devices, and scatter feeding carried out in a non-routine schedule. They may also need nesting material composed of mulch, straw, or another soft substrate [1][5].

Despite their diet in the wild, polar bears do not need to be fed seal meat to obtain proper nutrition. In zoos, the bears are fed a combination of a nutritionally complete carnivore diet formula along with saltwater fish, bones, whole prey, and vegetables [5]. Prepared diets include dry dog food, “gel” products, meaty Zoo Carnivore Diets, and whole prey that includes rabbit, trout, herring, and mackerel [1][5]. 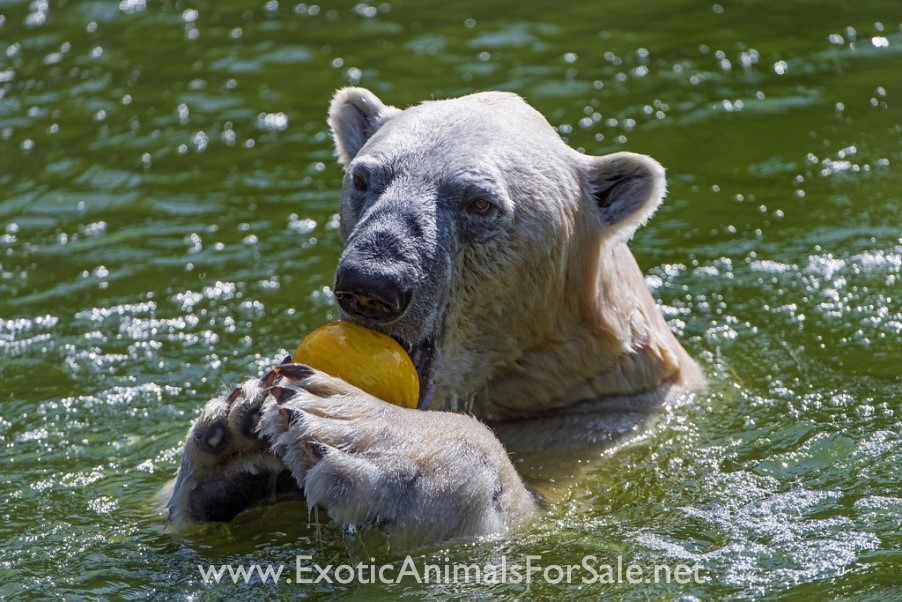 "Polar bear with melon II" by Tambako the Jaguar is licensed under CC BY-ND 2.0

There is at least one known owner of a pet polar bear. Mark and Dawn Dumas own Beyond Bears Inc. in Abbotsford, British Columbia, Canada, and residing there is “Agee”, who is described as the “world’s only trained polar bear”, as well as Billy, the grizzly bear. According to a “truly” video, the polar bear has been owned since she was 6 weeks old and she was raised inside the Dumas’ home. This is a common scenario for “tame” large carnivores that interact well with their owners. 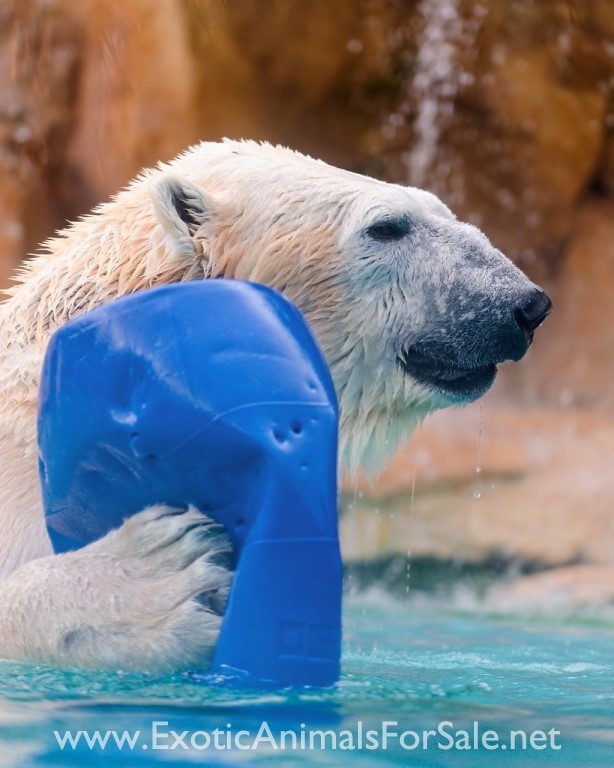 "Polar bear with blue barrel" by Tambako the Jaguar is licensed under CC BY-ND 2.0

Many might not consider Agee to be a “pet” because the Dumas’ own her and their other animals for work in the television and film industry. However, this would be like saying Lassie and Rin Tin Tin weren’t pets. Agee is owned and cared for by the couple and lives on their property—therefore she is their pet.

Agee has been featured in commercial and films, including “Alaska” (1995), “Operation Arctic”, and “Two Lovers and a Bear”. On the website, it is said that she has been to Europe twice, highlighting her comfort level with travelling and human exposure. According to the Linkedin profile of Mark Dumas, he has extensive experience in animal training and the film industry, but doesn’t appear to have any formal training. 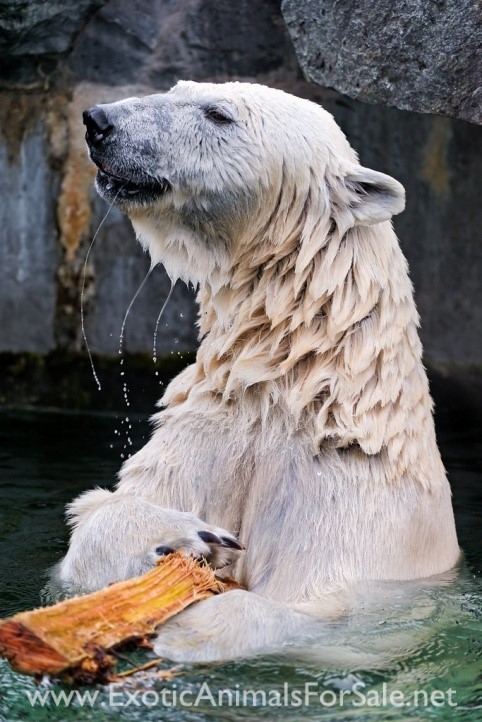 "Polar bear with the big stick II" by Tambako the Jaguar is licensed under CC BY-ND 2.0

Is Owning a Polar Bear a Good Idea?

The obvious answer just happens to be the right one here: no. Like lions, spotted hyenas, and other large carnivores, these animals, when hand-raised and socialized, can have a lovely disposition even most of the time, but are still exceptionally powerful animals that can seriously injure and harm humans with ease. It would only take one bad day, accident, or misstep to end up in the wrong place at the wrong time.

Even if someone were to keep a bear without going into the enclosure, accidents can occur, and zookeepers have been attacked by large carnivores entering the enclosure to do maintenance, unaware that a door has been left unsecured or the animal was unexpectedly present. There are inherent risks to keeping any kind of bear, which are all potentially deadly to own as pets. With this being said, some people have done so successfully, as Mark Dumas seems to be doing, and both animal and owner appear content, for now.