The Alpaca is a member of the Camelid family, the family you are familiar keeps camels in. You are most familiar with the Camelids that have humps; The camels of North Africa, the Middle East, South Asia, and the Bactrian Camel of China and Tibet. Four other Camelids are in the family, though, and don't have humps. They are native to South America and include the Llama and Alpaca. These amazing Camelids have been one of the longest domesticated animals in the world. The other two Camelids without humps include Guanacos and Vicunas. The Alpaca Camelid is bred into two types; Huacaya and Suri. 90% of Alpacas are of the first kind and they have fluffy, crimped fleece that gives them a stuffed animal appearance keepers love. Suris have silky, luxurious fleece that fall beautifully in pencil-wide locks. 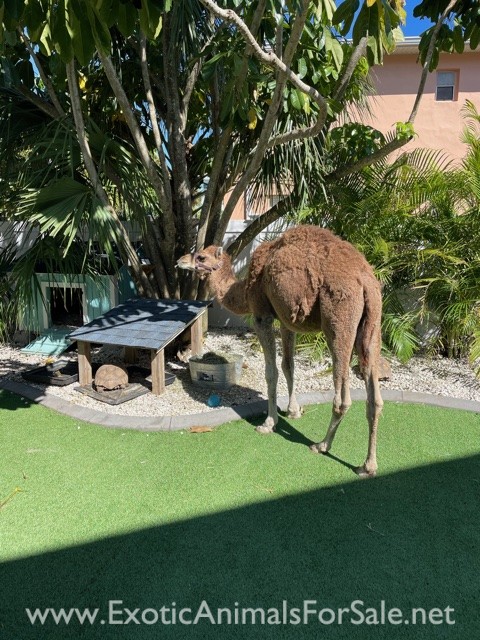 You are looking at my 11 month old male dromedary camel that I have for sale. His name is Joe. He is still intact. He is a very friendly and happy camel. He has been raised with other camel for his entire life. Joe is used to wearing a harness a...

two year old bottle fed male. Very sweet boy. We have gotten into raising alpaca and I simply don't have the time to socialize him. You must have a permit number from ODNR.

Llamas and Alpacas are similar, so what makes them different you ask? While they are closely related, they are distinctly different in the following ways. Llamas are twice the size of the average Alpaca and weigh twice as much. Alpacas stand as tall as 36 inches high and only weight 100-200 pounds, something to consider when thinking of keeping them. Llamas are given the responsibility of guarding domesticated herds of sheep and even Alpacas, while Alpacas are bred for their fleece material. It's for this reason that Alpacas are considered livestock in the United States and Canada, and not an exotic species. They have been domestic livestock for thousands of years. They are a profitable livestock option, too, living as long as 15-20 years. The longest recorded life of a domestic Alpaca was 27 years.

Common questions Alpaca keepers get are: do they spit, are they dangerous, are they easy to keep and do they need to be kept in herds? This article will highlight some of the main points of how to properly care for an Alpaca.

Alpacas do spit as a means of expressing disdain, usually for another Alpaca. It's common to see an Alpaca spit if it feels that an Alpaca or person is too close to their food source. They often spit at each other during fights, so if you feel that you've been spit on, if there is another Alpaca nearby, it's likely that you were just caught in the middle of their squabble. Alpacas are generally safe to be around. They don't bite or kick you like other species may. Even small children are typically safe with them, but should not be left unsupervised yet. Other than that isolated spitting behavior, Alpacas are quiet and docile. They make very little sound. Sometimes they hum when they are stressed, or shrill at one another during one of those squabbles. When a male Alpaca courts a female Alpaca, they make throaty sounds called “orgling'.

Alpacas do require companionship of other Alpacas because of their deeply rooted herding instincts. You can provide your Alpaca a same-sex Alpaca and that will do just fine.

Considering the amount of care some livestock need, Alpaca are easy enough to keep. Anyone with experience with other species, should do well with Alpacas, even enjoy it. Because of their small size and “thoughtful” behaviors, they contribute to a communal dung pile for easy cleaning. They only require some pasture and food. You can keep up to 8 Alpacas on one acre of land! But do speak with your local agencies to get specific recommendations for Alpaca livestock. Grass hay is what comprises most of their diet, but can benefit from having their diet supplemented with vitamins and minerals. There are manufactured Alpaca feeds on the market. Again, consult with your local agency for diet recommendations to be sure you've considered the types of pasture and food sources you have naturally made available to your Alpaca(s). They absorb nutrition from simple food sources so efficiently, but require plenty of fresh water. They only need basic shelter and protection from the elements, some vaccinations, and anti-parasitic medicine. Once per year, their fleece should be completely sheared to keep them cool in the summer months. Toenails, too, need to be trimmed on a regular basis.