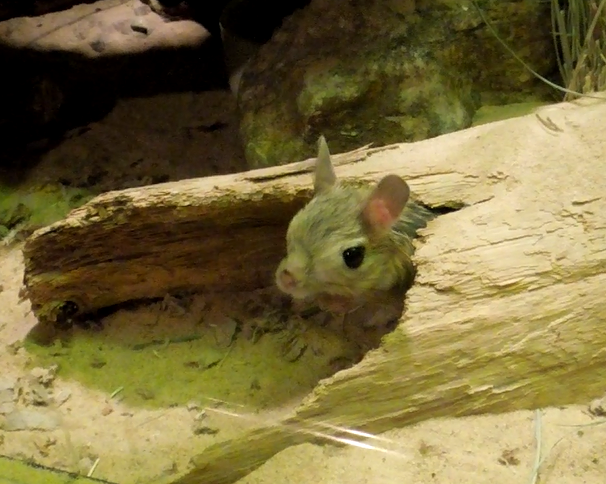 Jerboas are small rodents with a rather bizarre-looking appearance that are rarely kept as pets. They are distinctive in appearance and highly sought after because they are one of the few mammals that are bipedal, maneuvering with a hopping motion in a similar fashion to kangaroos, as well as sprinting like a road runner. Their particularly thin legs and tiny size make this mode of locomotion appear even stranger; therefore jerboas are fascinating to observe in captivity.

Unfortunately, they aren’t readily available due to two important factors: they are extremely hard to breed in captivity and there is a restriction on the importation of African rodents (in the United States).

Jerboas in the Wild

Jerboa species actually comprise of 33 different species within the family Dipodidae [3], although only two species, the lesser and greater Egyptian jerboa, are most commonly and currently found within the pet trade [4].

Some Species of Jerboa that have been kept as Pets (some species are rare or impossible to find):

Jerboas can jump up to a meter when they need to, and they rarely drink water, getting most of their hydration needs from the diet that they eat, although some species may lick morning dew [2]. Lesser jerboas have a lifespan of about 5-6 years in captivity [3].

Diet in the Wild: The lesser Egyptian jerboa will eat roots, vegetation (of which they get their water intake), grains, grass nuts, and some insects [6]. The greater Egyptian jerboa eats a similar diet with succulent roots and some cultivated vegetables [8].

Can You Own a Jerboa as a Pet?

In the United States, unfortunately, jerboas have been out of the pet trade for possibly up to 20 years. This is thanks to an unfortunate ban of African rodents by the CDC. All rodents of African origin are not allowed to be imported to the U.S. even if they weren’t born in Africa unless the importer obtains a valid permit from the CDC which is only issued for scientific, educational, or exhibition purposes.

Presumably the standards to be considered for ‘education or exhibition use’ are stringent and hard to meet considering there are thousands of USDA-licensed facilities that would love to obtain jerboas if it were possible. Some pet stores have advertised that they were importing jerboas, only to have the deliveries cancelled.

This embargo was in response to a 2003 outbreak of monkey pox, which originally resulted in a ban on even the interstate movement and sale of African rodents and prairie dogs. This ban was lifted in 2008, but by then, the remaining jerboas in the United States had not bred well enough to sustain a captive population.

Jerboas are also uncommon pets where they aren’t legal because they are difficult to breed and require a lot of space. In addition, common methods of rearing jerboas in ‘open’ cages often led to litters that were rejected by their mothers [3]. European jerboa owners have made a lot of progress since the small rodents went extinct in the United States pet trade. There is a Facebook group called ‘Jerboa Pet Owners’ where owners share husbandry and breeding information. 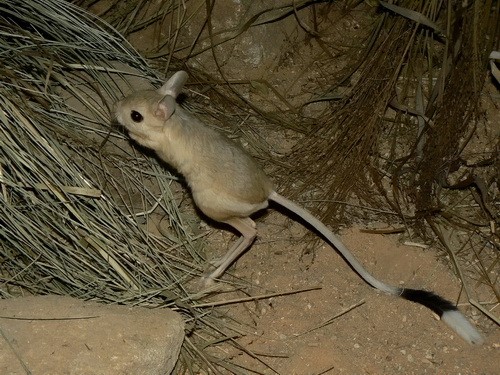 All jerboa species have very specific care requirements making them much more difficult to care for than common rodents of a similar size. Some concepts that are new to the captive care of small rodents that some European caretakers provide is the addition of live plants and temperature control [4].

In large enough housing, jerboas can be kept in pairs or even groups [2]. Glass enclosures are commonly recommended for jerboas instead of cages with bars. Many different cage sizes have been recommended for this very active species of small rodent. As there is even contention on the size of enclosures for common hamsters, jerboas, being inherently more space-demanding given their locomotive characteristics, should be housed in substantially larger cages than traditional small pets.

One owner in an older article stated that a 20 gallon tank is a “reasonable minimum requirement” but that he felt bad for the animals in that size [1]. These animals died in 6 weeks due to unknown causes. Harvard University had some success breeding lesser Egyptian jerboas in glass terrariums, sized 32x20x20 inches with only bedding, a nest box, a sandbox and a food bowl [5].

On the larger end, a source from the UK recommends 6 x 3 x 3 feet [3], which sounds like a safer size to aim for in order to insure that the needs of this high-maintenance animal are met. Unlike with other rodents, the height of the cage is important as this species can jump several feet when startled [3].

Given the lack of breeding success in the United States and the better results breeders have had in Europe as of recent, these larger cage sizes may be essential. Therefore, jerboa owners should aim to choose a cage size on the higher end of these recommendations while observing the animals to monitor if this space appears to be adequate. It’s always possible that an upgrade might be required, so it’s a wise idea to go as big as possible to start with (especially for the larger greater jerboas).

Temperatures for jerboa enclosures should be in the 70-80 degrees F during the day, and can be allowed to drop at night [2]. As jerboas cover a lot of area in their movements, excessive cage furniture is likely to offer less benefits than it would for other small pets. Jerboas do not climb [4], so additional levels should not be used. A few tubes and tunnels can provide additional hiding spots and enrichment [4].

Sometimes breeding success can help guide keepers towards conditions that may favor the welfare of captive animals. Lesser jerboa breeding success was achieved with a hinged dual-chambered box that had a low entrance which was then sealed by the rodent as a nest [3]; therefore it is a good idea to provide a similar hide for the comfort of the animal. In the Harvard study, these borrowing rodents were provided with 2 inches of bedding, so this is a probably a good minimal depth [5]. Other recommendations from hobbyists state a minimum of 6 inches should be provided so that the jerboa can burrow and have their legs protected when jumping [6].

The Harvard breeding program, used corn cob bedding, but bedding acceptable for other small rodents, such as aspen, may work. Jerboas must bath in sand to maintain the health of their coat [5]. Many jerboa owners use sand as the main substrate, or they provide sand baths. The Harvard program used chinchilla dust in a ‘chinchilla bath house’ [5]. Hay can be provided as additional substrate (it will also be consumed) [4]. Jerboas do use wheels, and a large wheel should be provided as extra enrichment [4]. 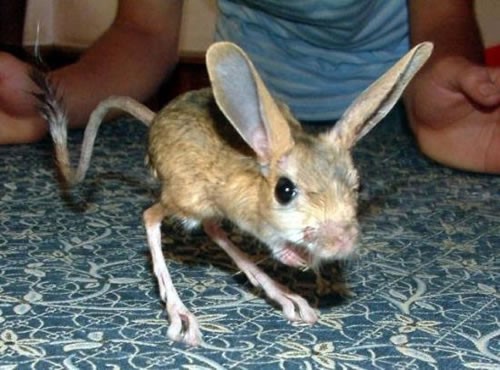 Are jerboas good pets? The answer depends on what you expect of these small rodents. Obviously, given their larger cage requirements and the fact that most sources recommend they are owned by experienced keepers only, they are not suitable for the ‘casual’ pet owner. Personality-wise, while jerboas can be skittish and not calm by the standards of commonly-owned, domesticated small pets, they have been reported to rarely bite, although they can deliver a swift kick when startled [4].

Another wonderful attribute of this personable little species may be their curiosity and docility, which is somewhat unusual among small rodents common in the pet trade. One owner described his pair of wild-caught lesser jerboas as “intelligent and interactive”, and that they would follow and investigate him and his small dog [1]. Aside from their poor breeding success and space demands, reports by many owners suggest they can make great pets given that their care is adequately researched and strictly adhered to. Hopefully one day the CDC will allow the import of these special rodents to the United States in the future.