Cats are either the first or second most popular pet species on Earth; therefore it is natural for one to wonder if other types of cats can be kept as pets. There are several species of so-called 'wild cats' that are in the pet trade and intentionally produced hybrids between those species and domestic cats. Sand cats are a relatively little known species of feline that are attracting attention due to their small size and similar appearance to 'regular' cats, although they also have enough distinctive features to make them uniquely beautiful. Can sand cats legally be pets and is anyone keeping them? Here is the answer. 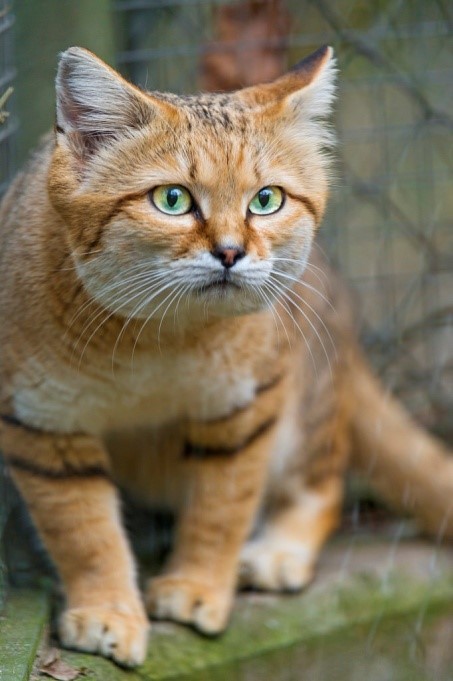 What are Sand Cats?

Sand cats (Felis margarita) kind of look like orange tabbies, but their head also has an unusually wide oval shape. They also have two stripes on their front legs and entrancing eyes, making it obvious they are not ordinary cats. These small cats originate from the sandy deserts of Northern Africa and Southwest Asia. They are labeled 'Least Concern' on the IUCN Red List. These reclusive and solitary cats occur in low densities in the wild and are uncommon for people to sight. Their populations may be threatened by habitat fragmentation.

Sand cats are currently extremely rare in the exotic pet trade. Servals are probably the most popular exotic cat species besides hybrid animals, and then there are bobcats, caracals, lynxes, and more. Relative to those animals, sand cats have almost no presence in captivity, but a few people have had the opportunity to own one. As of 2018, one seller has offered the animals for sale for $7000 per cat and up. These animals were claimed to have come from a 'breeding farm'. Some individuals have imported sand cats from other countries as well in the past. One sand cat owner unfortunately lost their kitten to what they described as a deformity resulting from inbreeding. This owner suggested that the cat's behavior was 'reptilian'. Another sand cat owner had a more favorable opinion of their pet and more success keeping it alive. They described its temperament as "charming" and having the personality of a "shy and very excitable domestic cat". It's common for exotic pet species to have variation in their behavior and you often won't know what you're getting.

As sand cats are very uncommon in the pet trade and even in zoos, it is not yet possible to accurately give an idea of their personality as pets. As with every animal, there are also different factors that will determine how the cat will be as a pet. These factors include how the animal was raised and if it was socialized, whether or not it was captive-born, genetics, and the age that it comes to live with its owner. 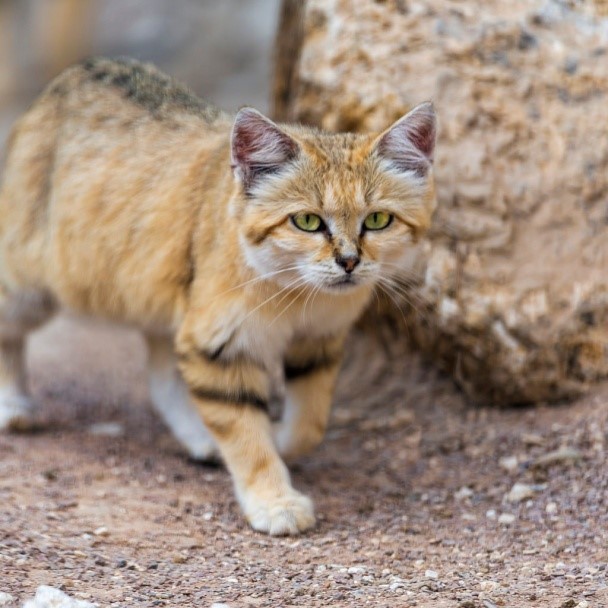 Unfortunately, exotic cats are illegal in most states. Sand cats will fall under the umbrella term as a 'wild cat', and most laws ban these animals because of the lethality of 'big cats', despite the presence of smaller species that are not more dangerous than domestic cats. Some of the few states that don't ban exotic cats (not including various native species) are Nevada, North Carolina, Florida (with a no-cost Class 3 pet permit) and Texas. These are not the only states where the cats are likely legal but anyone truly interested in getting an exotic cat should triple check the laws in their state, county, city, and any other regulating body. 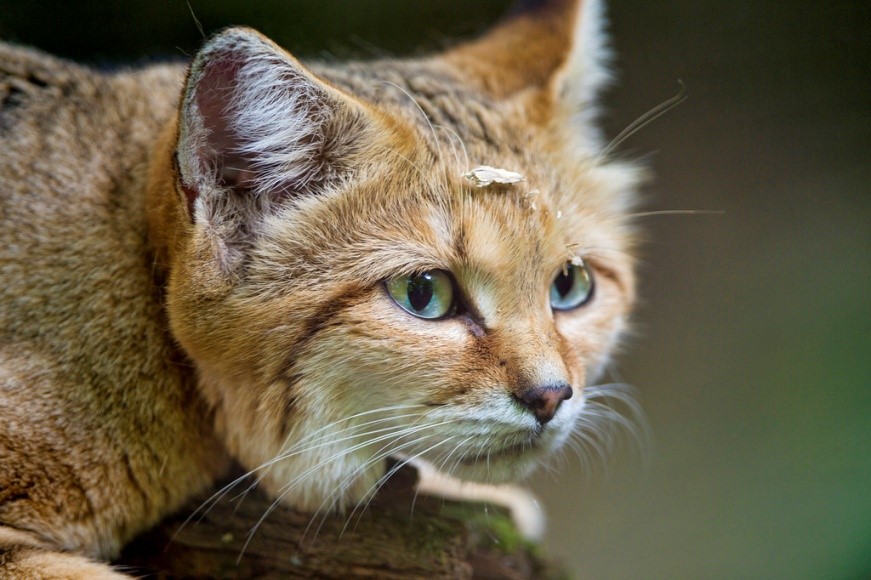 Sand cats are somewhat challenging to maintain in captivity. Unlike domestic and other exotic cats, these animals can be sensitive to humidity levels. Sand cats hail from the dry deserts of Africa and Asia and they can be prone to respiratory infections in most households. To remedy this, it could be a good idea to provide heating in a sealed enclosure to keep the conditions more dry.

What do Sand Cats Eat?

People who've owned sand cats feed them a raw 'natural' diet of meats and insects. These food items include frozen chicks, mice (there may be some contention about the nutritional content of domesticated, captive mice vs. wild mice with the latter being healthier), rats, crickets, superworms, and other feeders. Sand cats also have been known to drink little or no water, getting moisture from their food. This would certainly make it important to avoid mainly feeding dry foods. Inadequate nutrition has also been shown to be associated with stereotypic behaviors in some captive animal species. Studies in domestic cats have shown many benefits to feeding them with interactive enrichment devices such as food-dispensing toys, including weight management and reduced boredom that helps ward off disease. This can be a great option for sand cats to receive extra stimulation without the stress of too much handling. A sand cat owner may opt to provide several small meals throughout the day instead of 2-3 meals per day as this simulates natural feeding behavior. 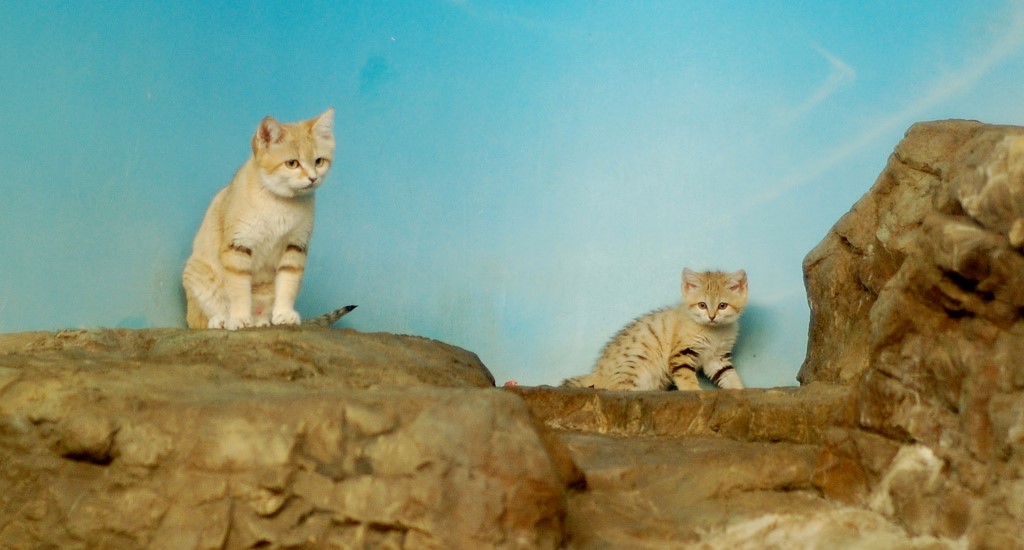 Sand cats should have a large enclosure developed that offers enough space for them to perform all important species-specific behaviors. The improper enclosure or lack of enrichment could lead the animal to perform stereotypic behaviors. Many smaller exotic cats have shown tendencies to become stressed around people in zoological environments and this was correlated with reduced reproductive success. It's a reasonable assumption to conclude that sand cats should be offered several places to hide so that they can feel as secure as possible. As their name suggests, sand or some other type of substrate might be a good option to include in the enclosure and could be used to hide food items to encourage more forging behavior. Olfactory enrichment involves the use of varied scents. Cat nip is very useful for many captive cats both large and small and will likely be enjoyed by sand cats as well. Other scents could come from used animal bedding (rodents and other prey animals, not carnivore), fur, and various herbs. The key to enrichment is keeping things 'interesting' by consistently introducing novel stimuli so the animal does not become habituated. To find out what really works will require research and observation. 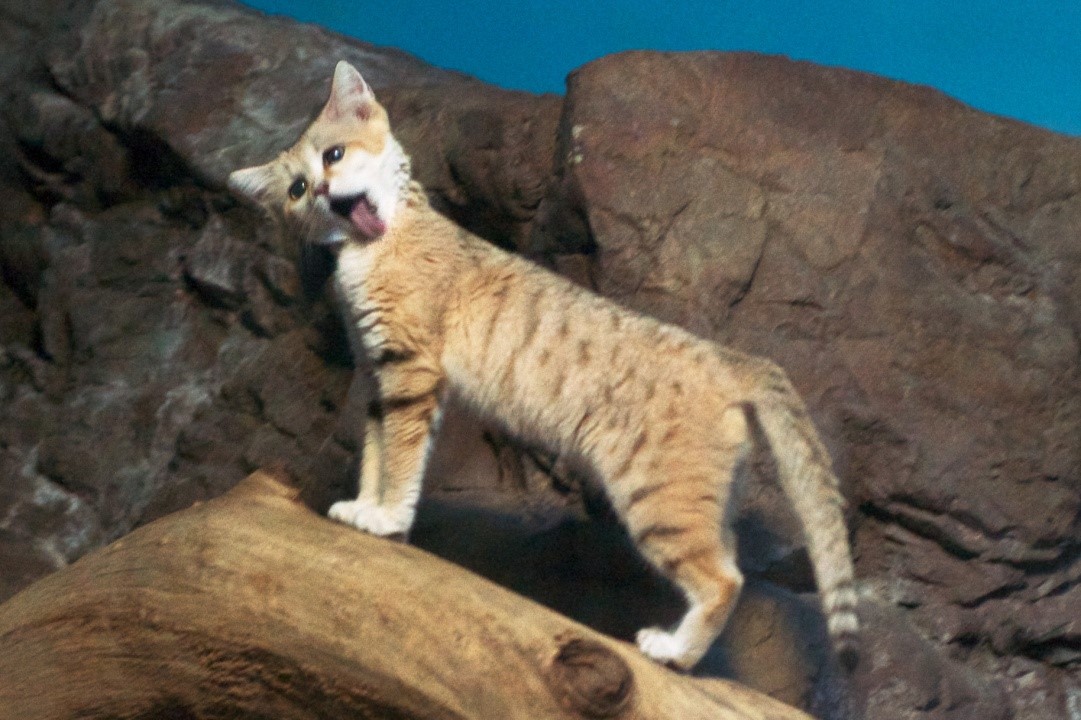 "Emergency Sand Cat Bath!" by Charles Barilleaux is licensed under CC BY 2.0

Like most non-domestic felines, the limited numbers of sand cat owners have described them as being skittish, and this should be fully expected of all captive sand cats. These are not 'regular' cats that will become perfectly tame with consistent handling (even feral domestic cats can be irreversible in this way). Sand cats and other small cats should have an owner that can work with them and be able to identify signs of stress that could lead to health problems down the road. Animals that cat tolerate human interaction receive many benefits, particularly with positive-reinforcement training methods to stimulate their minds and make it easier for the owner to identify physical changes for health evaluation. Therefore, interact with the sand cat as much as it will tolerate.

Due to the fact that sand cats are hard to find, expensive, and the places from which they are sourced are little-known, sand cats should require intermediate to advanced care standards. There is a fairly good chance that without educated husbandry methods and depending on where the animals come from, they can die prematurely. For now, it might be best to let the experts (zoos and private owners with a lot of experience) handle the care and husbandry of captive sand cats, and hopefully they could be bred as better pets for the future.