While prairie dogs are well-known to people as animals that live in the wild many are unaware that they can easily be kept as pets and are legal in most states. Prairie dogs got their name from the ‘barking’ sound they produce. These vocalizations are said to possibly be ‘words’ that the animals use to communicate with, similarly to human language. They have small ears, long claws, and resemble other ground squirrels.

“Black-Tailed Prairie Dog” by Jean is licensed under CC BY 2.0

This medium-sized rodent was once restricted from ownership briefly starting in 2003 due to the monkey pox scare that actually began with imported Gambian pouched rats. The virus was passed on to other captive rodents in a holding facility. The ban was lifted in 2008 but an embargo remains on the importation of all African rodents overseas. Prairie dogs make suitable pets for many people but they are not your typical pet rodent.

In the wild, there are five different species of prairie dog, but the black-tailed prairie dog (Cynomys ludovicianus) is the species which is available in the pet trade. Historically, their range extended from Canada to Mexico, including parts of the American West, but in modern times their populations have decreased by as much as 98% due to human activity and they no longer inhabit Arizona. Prairie dogs are some of the few diurnal rodents kept as pets and they live in large colonies, forging throughout the grassy plains and returning to their burrows at night. They consume mostly grasses which compose about 75% of their diet, but they are also opportunists, feeding on prickly pear, roots, other vegetation, and insects. Their diet changes according to the season.

They do not fully hibernate; rather they will drop their metabolism, heart rate, and respiration at night to conserve energy and will continue to forge during the day. They travel above ground less during rainy, hot, and snowy weather. 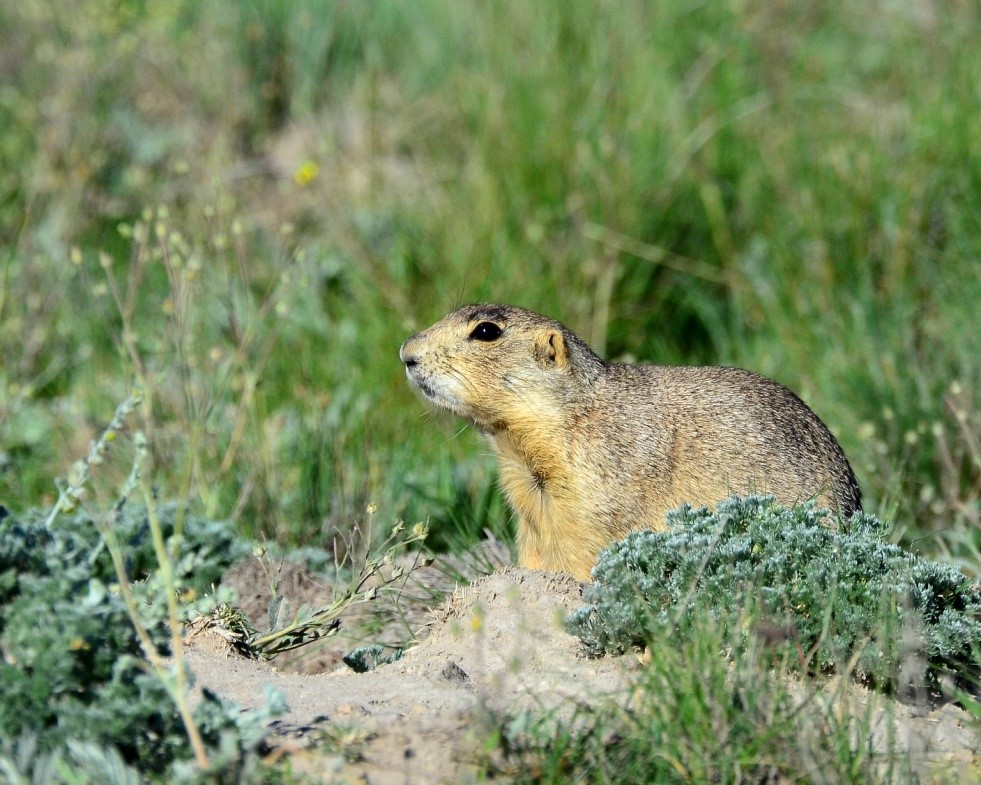 “Prairie Dog” by Larry Lamsa is licensed under CC BY 2.0

Ideally, you’ll want to acquire your prairie dog from a USDA-licensed breeder. A good indicator of a captive-bred animal is the price; the general cost of a baby prairie dog is at least $100, which is relatively low for an exotic mammal. Cheaper prices may indicate a wild-caught animal.

Many prairie dogs are removed from the wild because they are heavily persecuted as pests, despite being native animals. Throughout history, colonies have been buried alive, poisoned, and more recently, vacuumed out of their burrows by modified sewer trucks to be relocated or sold as food for black-footed ferret conservation efforts. In some cases, they are sold to the exotic pet trade, which is one humane way of disposing of them.

Wild-caught animals, especially those which are not babies, are better suited for people with experience, or they can become ‘hands-off’ pets, kept in large colonies in a roomy enclosure. The best pet prairie dogs are raised by their owners as babies; otherwise they might not bond as well. Be sure to inquire about how the animal was collected if this is important to you.

While they are legal in most states, be sure to check your local regulations. Unfortunately, sometimes prairie dogs can be considered to be ‘exotic’ or ‘wild’ animals and may be illegal to own or require a permit. Prairie dogs are not legal in California, Arizona, Hawaii, and other states (the laws are always changing, so check anyway). In some cases, proof of sale is required to determine they were legally collected or bred and sold. 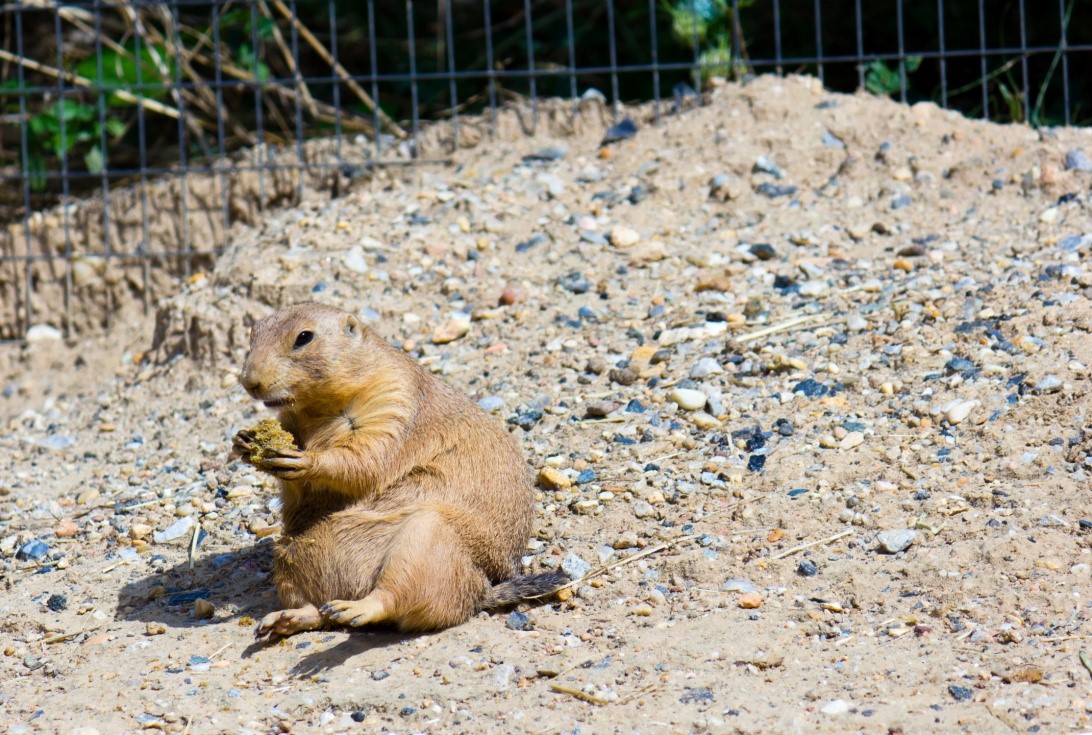 “Fat Prairie Dog” by Michael Bentley is licensed under CC BY 2.0

Prairie dogs are intensive chewers, so plastic cages, those made of wood, or those with flimsy metal bars are not adequate. Choose a cage with strong metal bars that are completely chew proof, such as a Critter Nation cage. This type of enclosure will have to be modified so it can include bedding, however. In the wild, prairie dogs forage over expansive grasslands, socialize extensively with other members of their colony, and build burrows that extend several feel underground with attached chambers. In captivity, obviously this cannot be replicated, but from this information you can figure that your pet will require a cage big enough to provide enrichment and enough burrowing substrate for them to comfortably excavate. Since prairie dogs are ground dwellers and do not climb, high ledges are not suitable for them. Therefore the length of the enclosure has more importance, although ramps that are not too steep can work. Choose recommended bedding for other small animals like rabbits and hamsters, avoiding those said to be toxic (cedar, non-kiln dried pine). While an aquarium can be used for babies, it’s important that the final cage have ventilation so that odors do not build up inside the enclosure.

Caring for your prairie dog

In captivity, prairie dogs have an 8 year lifespan. During this time, you should provide extensive socialization to your pet if it is kept alone. As loneliness is a problem for them, you might want to purchase 2 prairie dogs, but the size of the enclosure must also increase.

Prairie dogs are prone to weight gain and must have out-of cage time to exercise and a properly-sized wheel is also recommended. The wheel should be tall and thick enough so that the prairie dog has plenty of room. One way to help encourage prairie dogs and other forging animals is to spread their food throughout the enclosure and encourage them to look for it. Treat dispensing toys are another options. 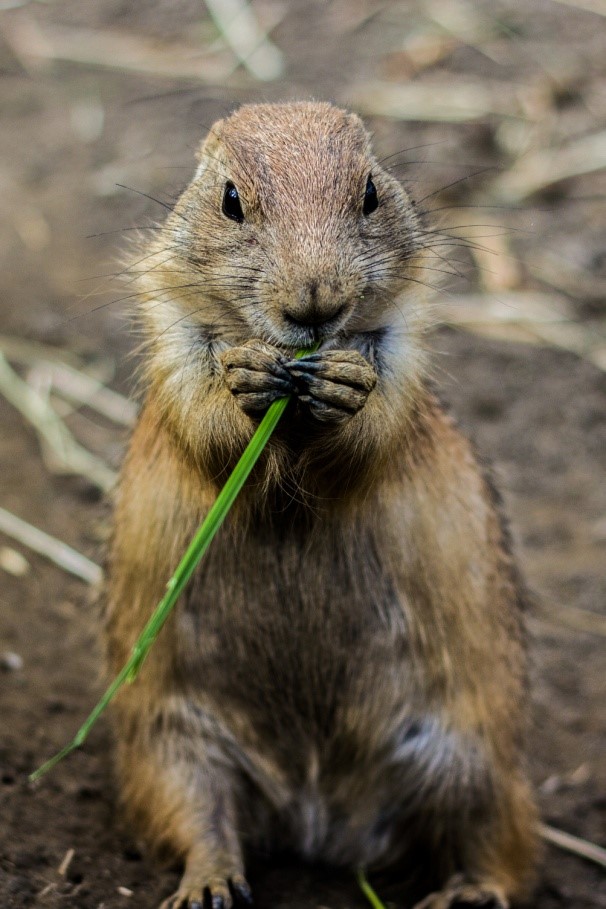 “Prairie Dog” by Lennart Tange is licensed under CC BY 2.0

Prairie dogs eat mostly grass and should have a high fiber diet. Hay, notably timothy, blue grass, or oat hay should comprise the bulk of the diet. Fresh grass and greens should also be added. Commercial pellets developed for prairie dogs can also supplement the diet. Keep water available at all times and provide plenty of items for them to chew on, as it is essential that they keep their teeth filed down.

Something you will have to decide on is whether or not you will get your prairie dogs neutered or spayed. Keeping them intact may lead to behavioral and health problems that can potentially be reduced or eliminated with this simple surgery. These issues include scent marking. Prairie dogs are unfortunately known for some spontaneous aggression that can result in ‘attacks’, particularly to people who aren’t the owners. This can be due to the animal coming into ‘rut’. Should you choose to get your pet fixed, which is recommended for pets, seek to have it done by an experienced exotic pet vet, preferably one that is board-certified in exotic pets or zoo animal medicine.