Camels belong to an animal family referred to as camelids which includes camels, vicunas, llamas and alpacas. There are two subspecies of camels; the Dromedary camel which has one hump and Bactrian which have two humps. The humps on the camel store fatty tissues for sustenance of the animal during extreme drought conditions. Dromedary camels mainly reside in desert conditions while Bactrians are cold weather camels residing in mountain areas. A female camel is refereed to as a cow while a male camel is referred to as a bull. Like horses, there are wild and domesticated camels. 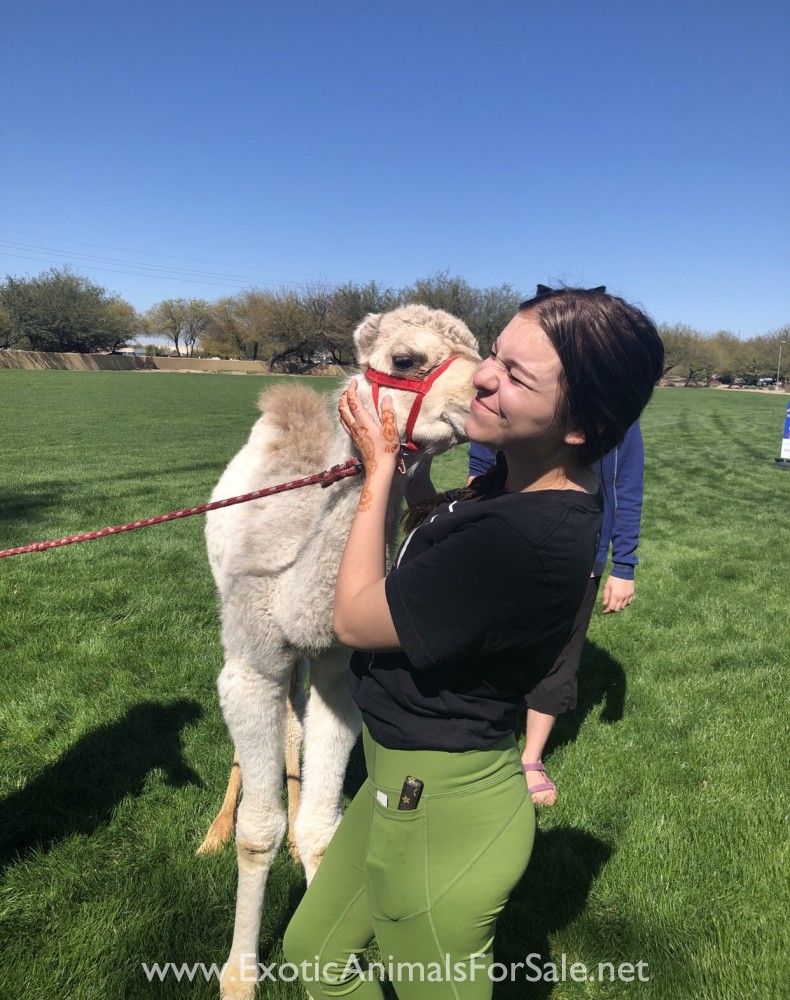 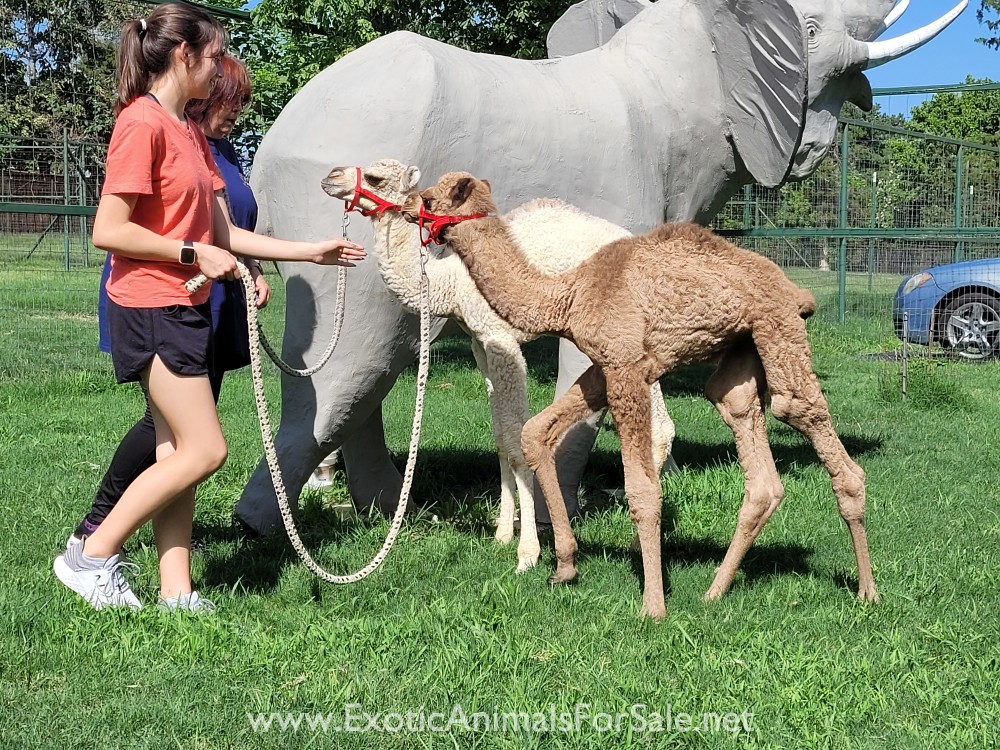 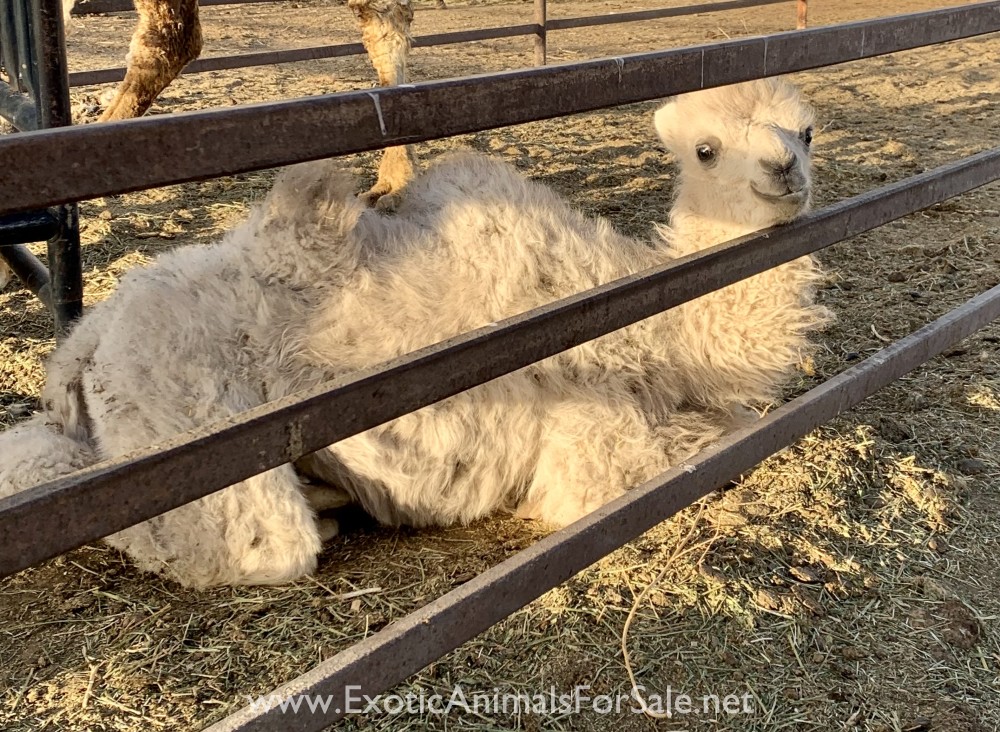 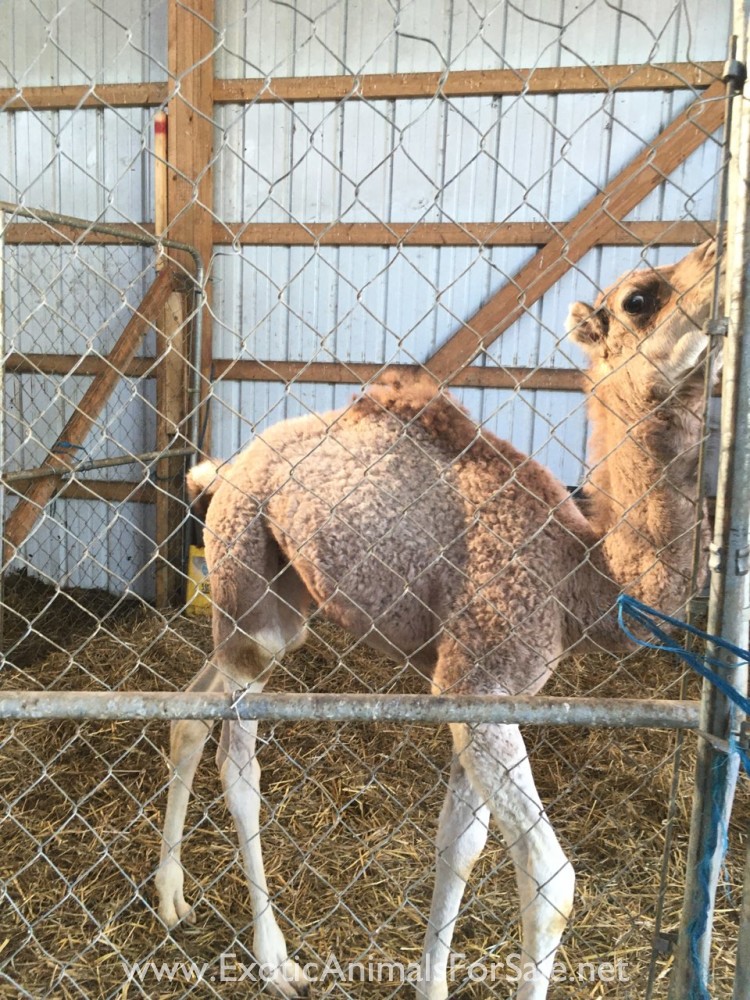 Two males and two females between 2 and 3 months old. Please call or email for details. Phone is a land line so texting is not available.

Camels are very well adapted to difficult climatic conditions. Apart from their resistance to high temperatures, camels can stay long periods without food and water. Most of the surviving species of camels have been domesticated although a few still remain in the wild. Apart from being kept as pets, camels are also reared as beasts of burden as well as for their meat and milk.

While the majority of camels in the world are domesticated, some camels still reside in the wild. These can be captured and be domesticated. A new farmer can also opt to purchase already domesticated camels from other farmers for breeding purposes.

Camels are quick learners and have very good memory. However, they tend to react and adapt slowly to new environment and situations. During training, physical discipline should be minimized and rewarding methods of training applied. For breeding purposes, a farmer should have several cows and one bull. Having more than one male leads to infighting which can lead to serious injury and damage to property. Care should also be taken when purchasing the herd as untrained animals will prove more difficult to train and contain. For untrained animals, heavy enclosure is necessary to ensure safety of humans and the animals.

Training a camel is much like training a horse only that camels are easier to bribe with food and take longer to get used to humans. Training should preferably be done by a professional trainer. However, farmer may opt to train his own animals. This requires that the animal be given adequate time to get used to the trainer by feeding it with grain while at the same time touching its head to develop intimacy. A halter should be gradually introduced while at the same avoiding getting into a fight with the animal. Once the camel is comfortable being tied, the trainer can start gradually leading the animal around. The whole process can take several weeks or months depending on whether the animal was previously trained and the age of the camel.

Pet camels require protection from extreme weather conditions such as heavy rains and direct sun. The shelter for the camels should be constructed in such a way that it protects the camels from direct wind, pests and predators. The interior of the shelter should be dry and can be lined with dry hay to provide a comfortable resting place. Regular cleaning should be done to remove camel waste. Dusting with pesticides should also be done to control pests such as ticks and mites.The shelter should also be at least ten meters high to enable the camels to move in out easily. Since the animals are tall, the roof should be high enough to give the camels standing room. The camels can be allowed to move freely in the pastureland during the day and they can easily mingle with other domestic animals such as horses and donkeys.

What do camels eat?

Camels are ruminants just like cattle. This means they regurgitate the food earlier eaten, re-chew it and the swallow it again. Camels do not require as much feeding as other domestic animals since they are well adapted for harsh climatic conditions. They require adequate supply of grass and hay. Dry hay is better as it does not cause bloating (a painful condition that can kill the animal). Alfalfa grass should especially be avoided as it is the primary cause of bloating. The feed should have adequate selenium levels as camels are highly vulnerable to selenium deficiency. Selenium supplementation can also be done. Care should be taken to avoid overfeeding them as this might lead to obesity and difficulty in movement. Commercial feeds meant for horses can also be fed on an interim basis. Feeds that contain growth promoting ingredients are poisonous to camels and should be avoided. Camels also require mineral and salt supplementation to ensure healthy development. This is best provided in loose form as opposed to salt lick blocks. Finally, the farmer should ensure that the camels have adequate supply of clean water.

Camels require similar veterinary care to other domestic animals such as cattle and horses. They require require regular vaccination such as Clostridium CD/T vaccine which protects the camels from diseases such as The west Nile virus and Leptospirosis. Rabies vaccination is also necessary. Camels also require regular worming to protect the camels against whip worm infestation. Panacur is good example of a wormer against whip worms. It should be applied on a double dose to overcome resistance. Worming should be done on a regular interval of two months.

Care should be taken when treating camels with antibiotics and medication meant for general livestock. This is due to the fact camels are very susceptible to kidney failure resulting from hard to breakdown medication. Special care should also be given to newborn camels. A blood antibody check should be done within three days of birth and where necessary, plasma transfusion should be done to boost immunity and increase their survival chances.

Conclusion While camel breeding requires a lot of careful attention, it is a very rewarding venture. Camels are very intelligent animals and make good pets especially when properly trained and given adequate care. They are less demanding in terms of the feeding regime and veterinary care.