Owning a kangaroo as a pet

Whenever someone considers owning an exotic animal as a pet, the first question they usually ask is, "Would an (insert name of species here) make a good pet?" The truth is, as most experts agree, the question should be "Would I make a good owner of an (insert name of species here)? Ideally, the prospective owner of an exotic pet should seriously consider the needs of the animal and whether or not they can fulfill those needs. It is only after thoughtful consideration of these needs and possible extenuating circumstances should a possible owner look into owning such a pet. 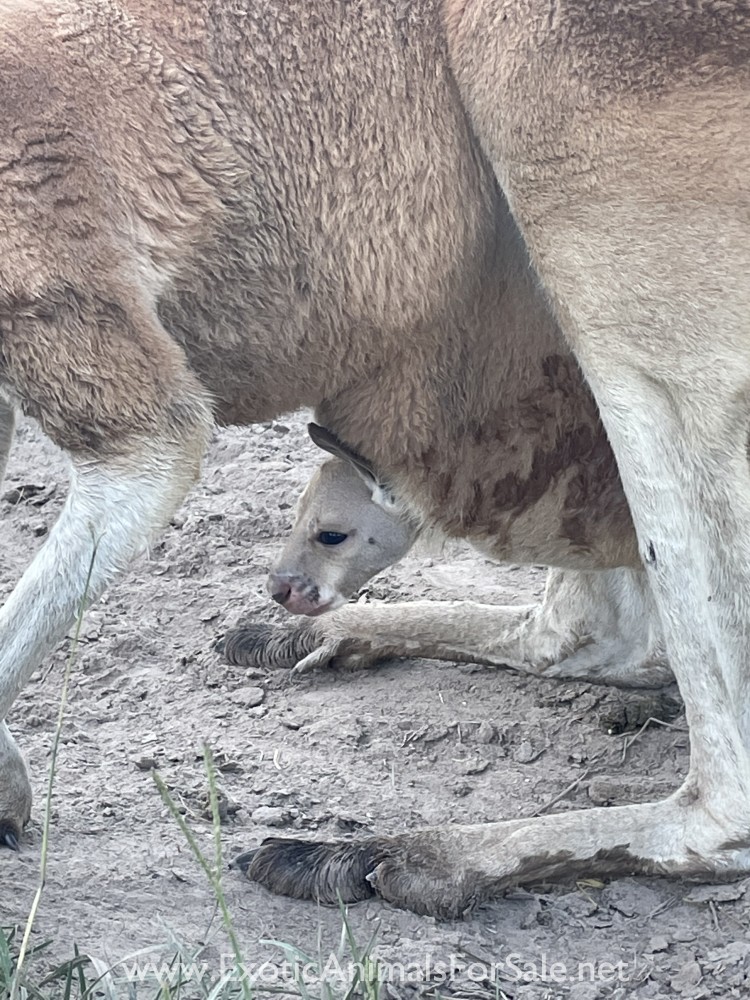 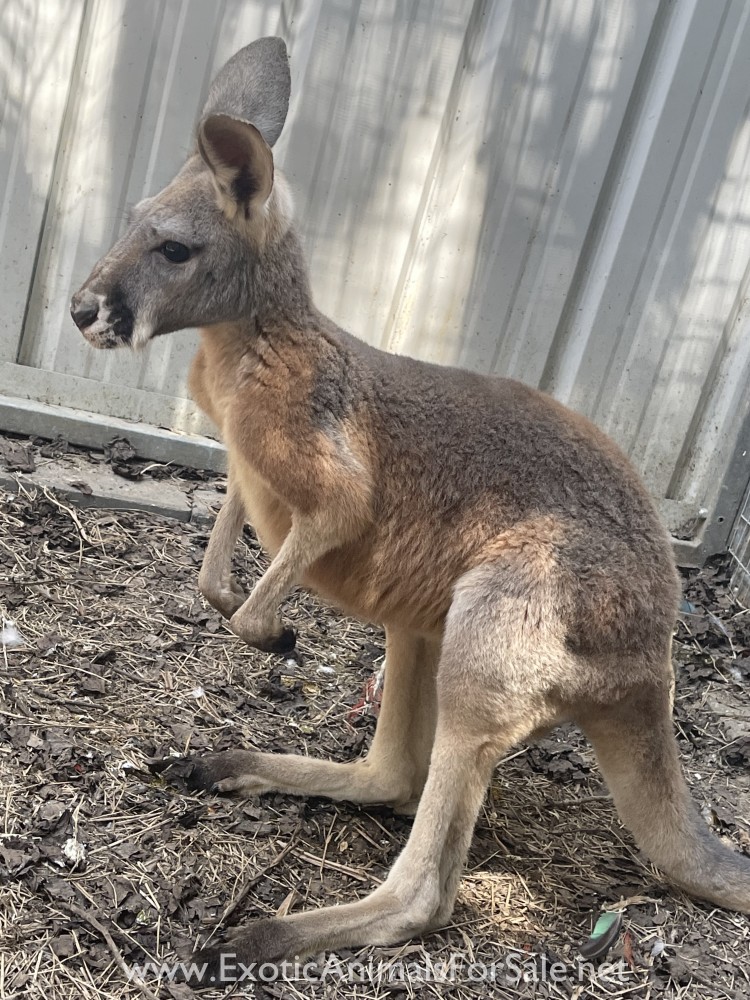 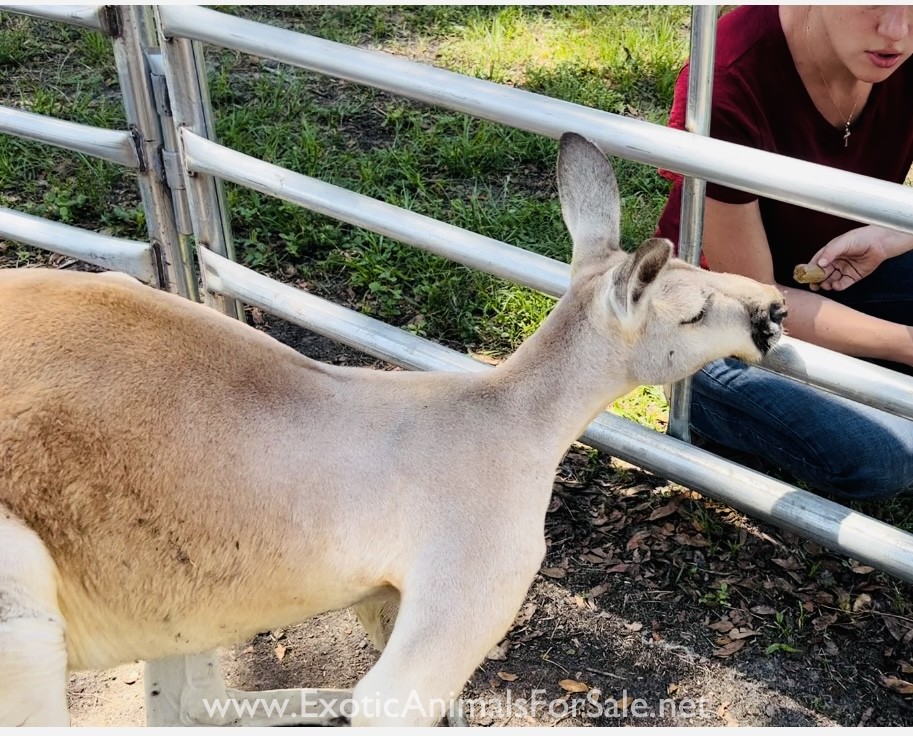 3 year old intact male red kangaroo. Has been kept around other animals. eats from the hand and can be pet. He IS intact. Please do your research before inquiring. In Florida a class 3 permit is required. Know your states laws. Located in Bell FLORID... 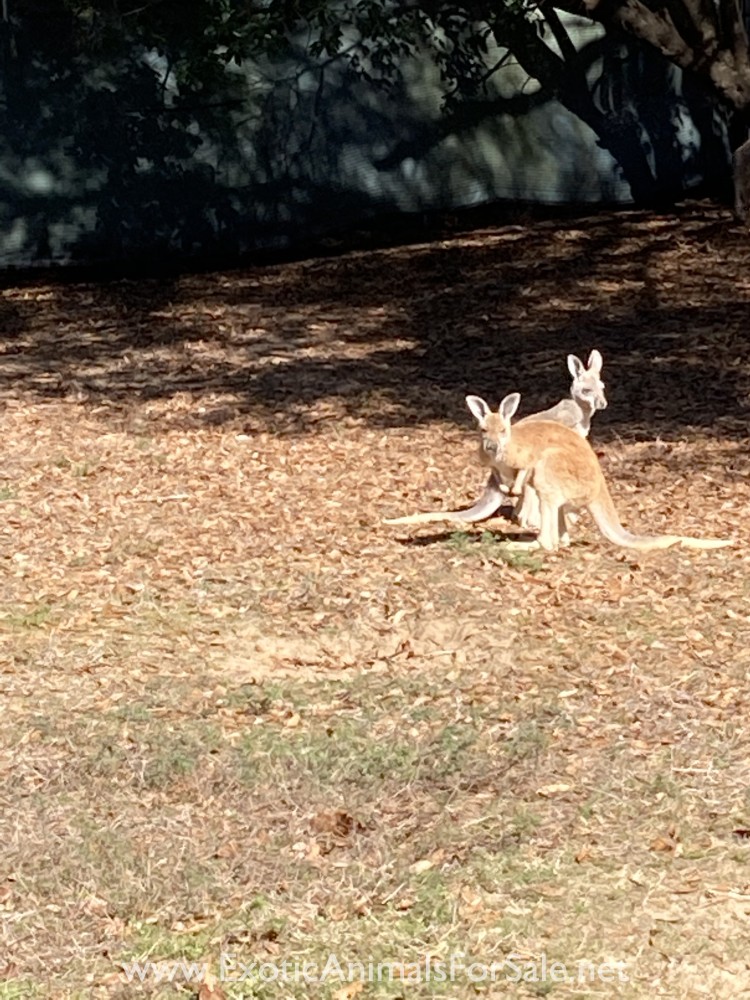 Bottle raised female Bennetts wallaby. Pulled February 2022. Very sweet and docile. Weaned and ready to go. On local hay and mazuri kangaroo feed. Will not ship. Enclosure must already be set up. Text for details 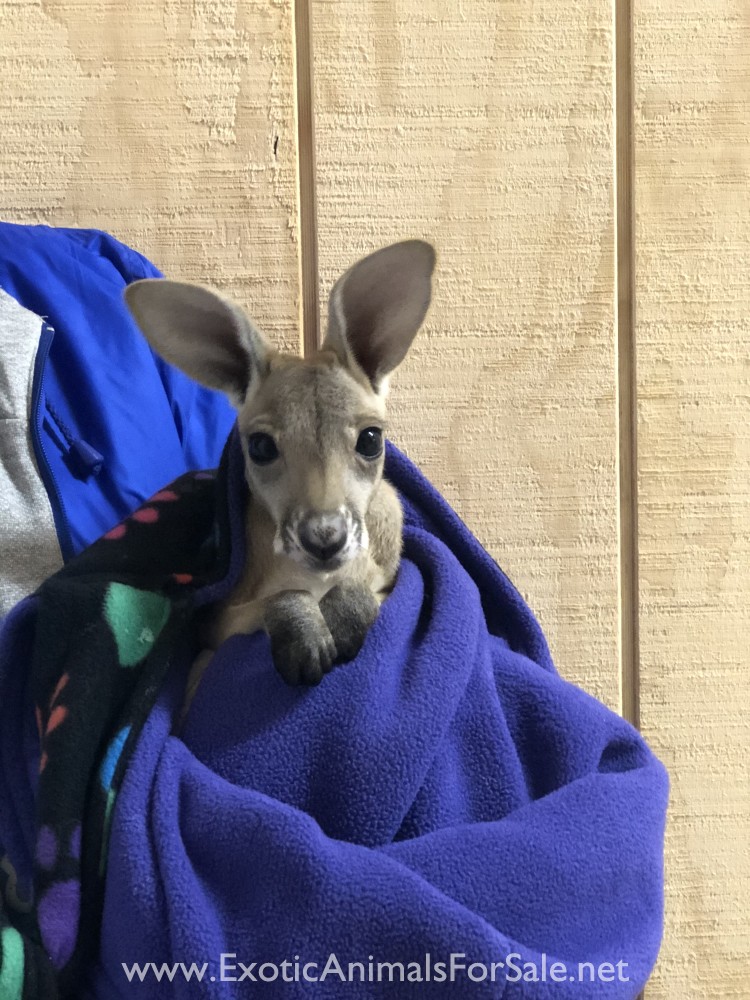 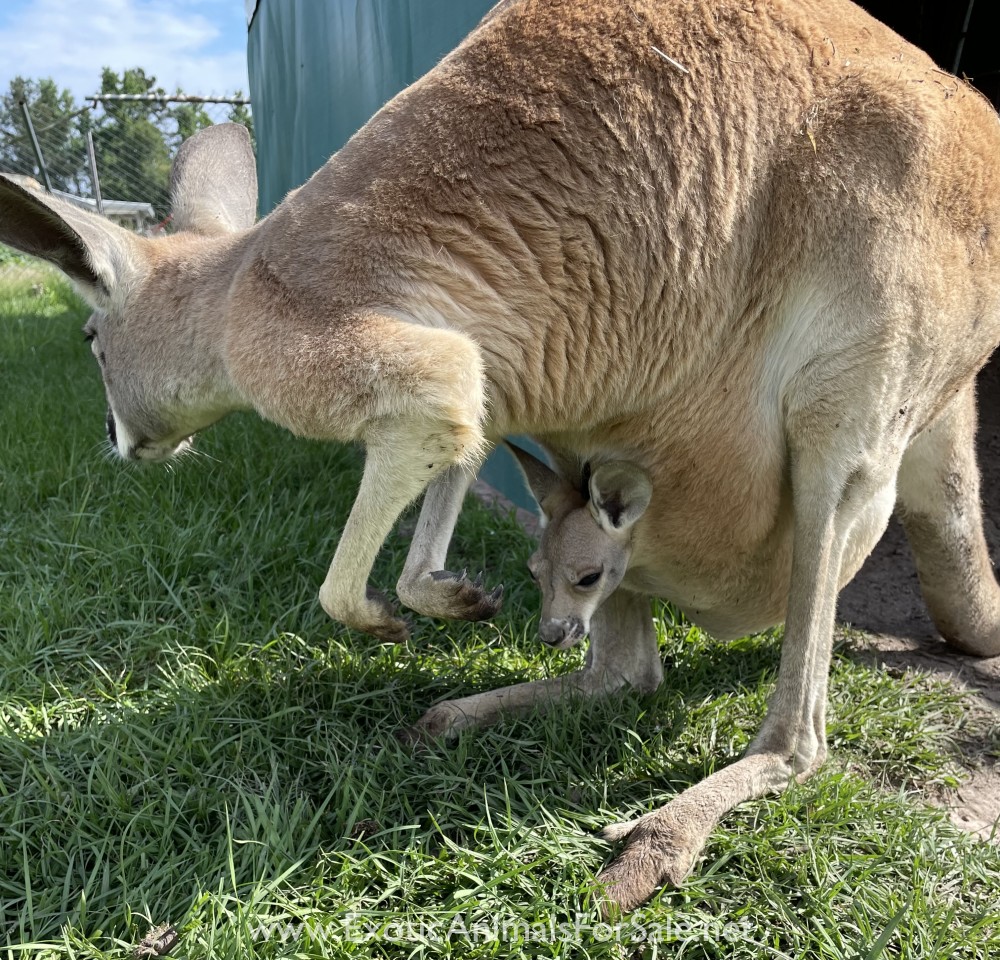 pulled and on the bottle

Wildlife Wonders has a Red Kangaroo Male for sale. Bottle raised since Oct 2021. Email for info

Male Red Roo Ready for new home! Easy to work. around but was mother raised be a great breeder!! Delivery may be possible. UTAH Please call 801-503-7242 or email ivieacresfarm@yahoo.com NO TEXTING LANDLINE 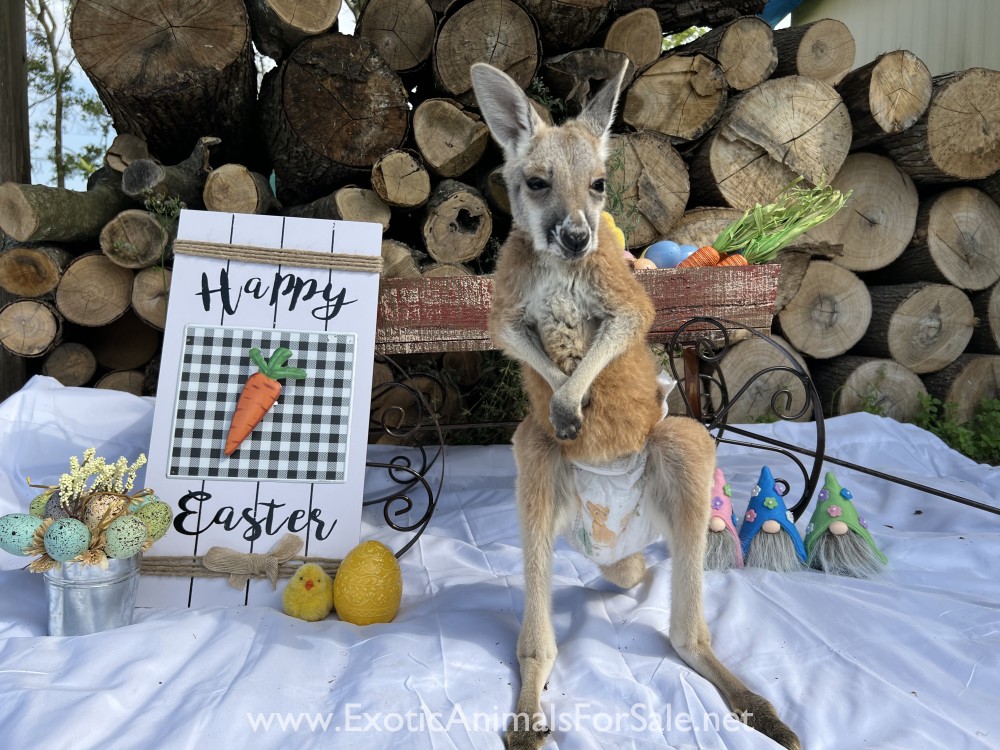 This is princeton. A 8 month old red male kangaroo. He is super social and had participated in easter photos shoots, encounter in our city, and a birthday party. He is also around dogs, cats, kids, and a bird! He drinks out of a bottle 4x a day. Any... 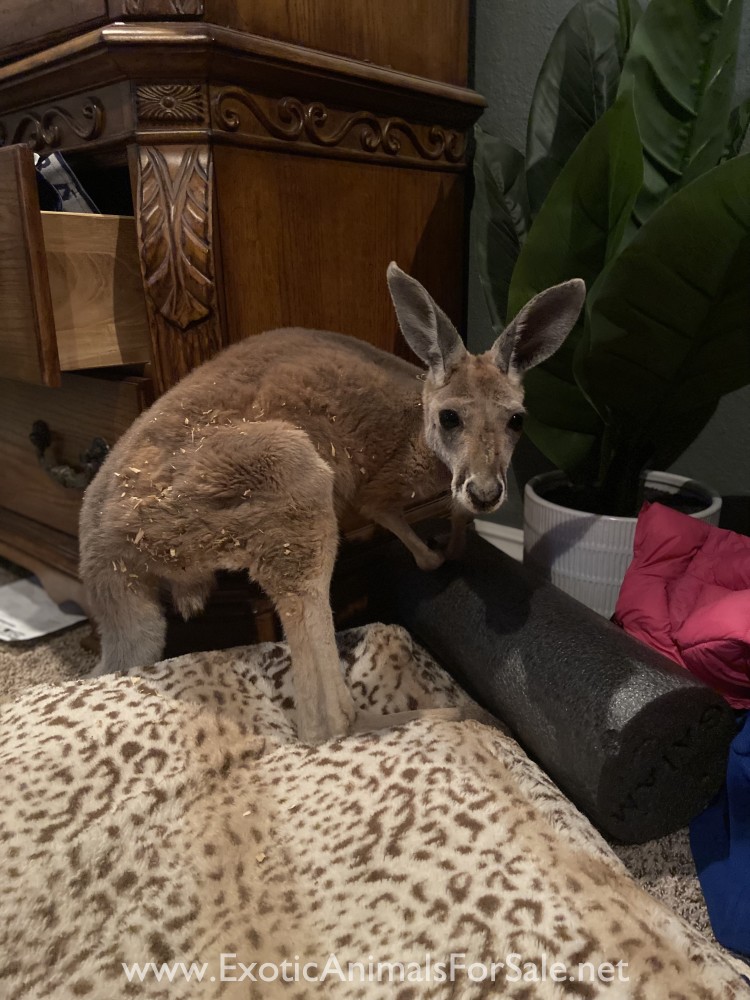 Male red kangaroo, 1yo, not fixed. Very friendly harness trained, would be great for Petting zoo or Encounters. His name is Rue. Serious inquiries only. Will be open to trades or reasonable offers. 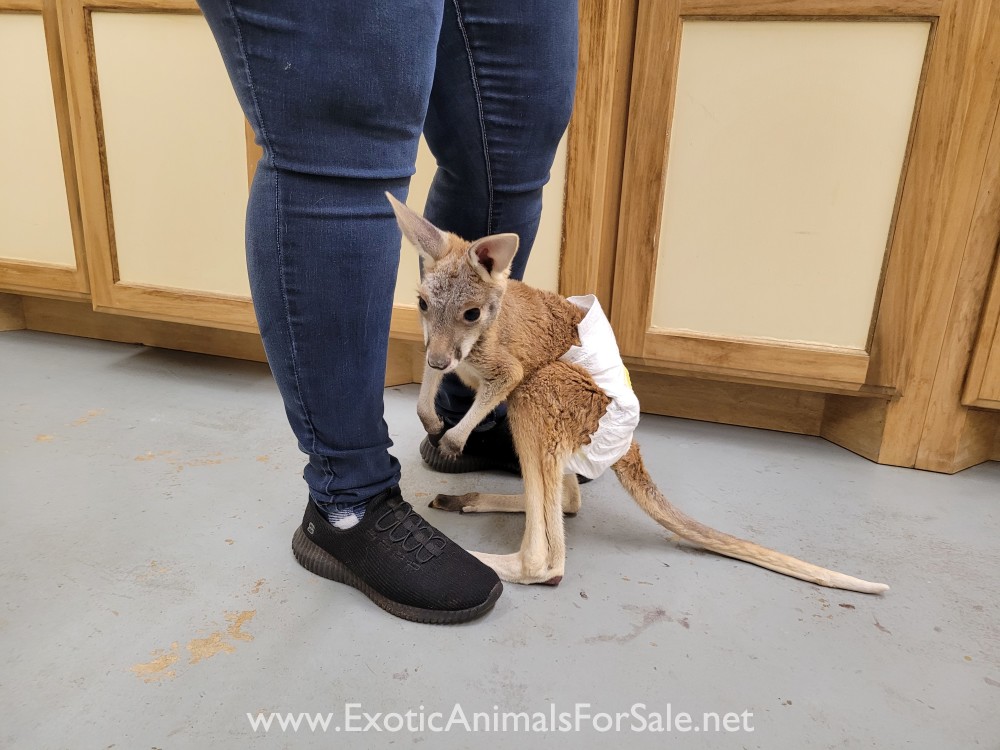 Neutered male Red Kangaroo, super sweet disposition, likes everyone, on a bottle 3 times daily, eating grain and hay. He is already neutered and will remain a good pet for life. Call or text 903-563-9284 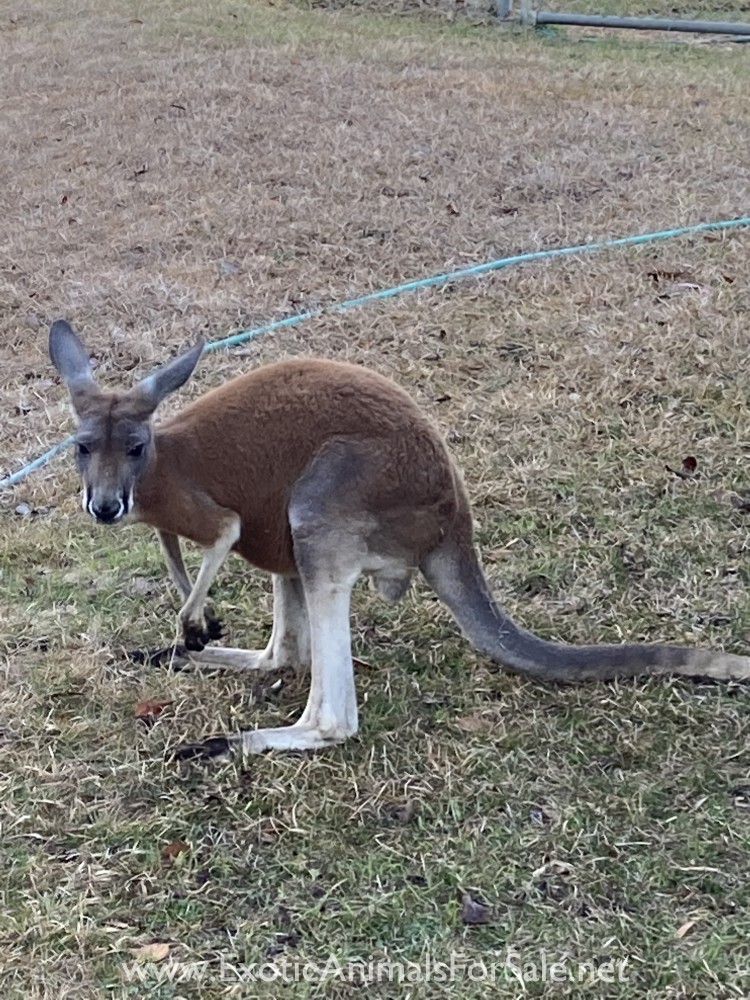 A kangaroo is a good example of an animal that often makes a good pet, but only in the hands of a person who is willing to learn about the animals, their needs, and the things about them that make them unique.

What is a Kangaroo?

Needless to say, kangaroos are native to nowhere except Australia. The only exception to this is one genus, the tree-Kangaroo, which can be found in Papua New Guinea. Kangaroos grow to as tall as 6 feet. They have small heads, powerful hind legs for leaping, and a long muscular tail for helping them maintain their balance. Kangaroos are called marsupials, which means that they are among different animals that carry their young in a pouch.

There are several species of kangaroos, a larger breed that adapts to the changing conditions of the land brought about by man and his development, and a smaller species that does not. It is primarily for this reason that the number of the smaller species has suffered in recent years while the larger are still relatively plentiful. Regardless, kangaroos are native to the wide open pasture lands of Australia. In the wild, kangaroos eat vegetation much like cattle.

Kangaroos are naturally shy and retiring by nature. This natural disposition brings most people to the belief that kangaroos make good pets, which to an extent is correct. In fact, kangaroos can be very docile and even love to be scratched and petted. Kangaroos do not, however make good indoor pets, primarily because after they quit feeding from a bottle and begin eating vegetation, they are practically impossible to housebreak. Also unlike other domesticated animals, kangaroos will not ride in cars, do tricks, or walk on a leash.

Unfortunately, the average backyard is not nearly big enough to keep a kangaroo as a pet, so if you are considering buying one to keep and show off to your friends, get a dog. Instead, the size of an area for a kangaroo should be more like that which you would have for a horse or other field animals. Kangaroos should also be kept in a fenced enclosure that is at least 6 feet high and 2" x 4" mesh. Many people worry that a kangaroo will be capable of jumping over a fence. This is highly unlikely. Further, once a kangaroo has gotten the message that an enclosure is home and that he is safe and cared for, he will not want to leave.

As along as a kangaroo has enough room to exercise and enough food to eat, they will be happy. A pen should be no smaller than 50' x 50', and very secure. It should have a gate on it that is kept locked at all times, since kangaroos have been known to unlatch a gate. Simply put, if there's a way out of a fence, a kangaroo will find it.

What do Kangaroos eat?

Kangaroos are grazers, meaning they like to eat what they can find. Ideally, you could feed them something like brood mare pellet or goat tex, but if a kangaroo finds a bush close by, he will nibble on that too. Make sure that you keep water nearby, but if you give them access to something like a pond or other body of water, be careful that you aren't inviting bacteria to your kangaroos. If you give them a body of water, make sure there is gravel besides it since kangaroos don't like to get muddy.

Kangaroos mate and breed like many other animals. The difference is in how their young, called "Joeys," develop. After the sperm fertilizes the egg, it goes to the mother's uterus but instead of a placenta being formed, the yolk feeds the embryo until it is time to be born, about 28 days. After this, the mother grooms her pouch and the joey emerges from an opening at the base of her tail, called a cloaca. At this point the fetus is pink and about the size of a lima bean. The only part of his body that is more developed are his arms, which help him, along with instinct, climb up his mother's belly and find his way into her pouch. The joey still has no jaws to feed, so the mother's nipple grows into the young's mouth and very gently forces milk into its mouth. When he is stronger, he will be able to detach and feed on his own until he has a light coat of fur and leaves the pouch. The second pregnancy occurs much differently since the mother mates again almost immediately, but the fertilized egg will stop growing when it has reached about 100 cells, then it stops growing until the other joey leaves the pouch, at which time the second one will replace him.