Lions (Panthera leo) are large carnivorous cats. The are the seconded largest cat in the world. They have a short coat that is tawny in color with a tufted tail and the males have a heavy mane around the head and neck. The males will grow to be 4 feet tall and 5-8 feet long. They will weigh from 330-500 pounds. The females are smaller than the males and will weigh 275 to 400 pounds. A lion can live 10-14 years in the wild and up to 30 in captivity. The lion can sprint up to speeds of 50 miles per hour. Lions are native to Africa and northwest India. Their habitat is open grasslands and open woodlands, They eat meat and will take small and large prey, even will take an elephant when other prey is scarce. They prefer to hunt at night but will be active and hunt during the day.

Triple "D" Wildlife is ZAA Accredited. Buyers must be USDA licensed to purchase Triple "D" Animals. Buyers are required to pick up, Triple "D" does not ship animals. Triple "D" requires a deposit. 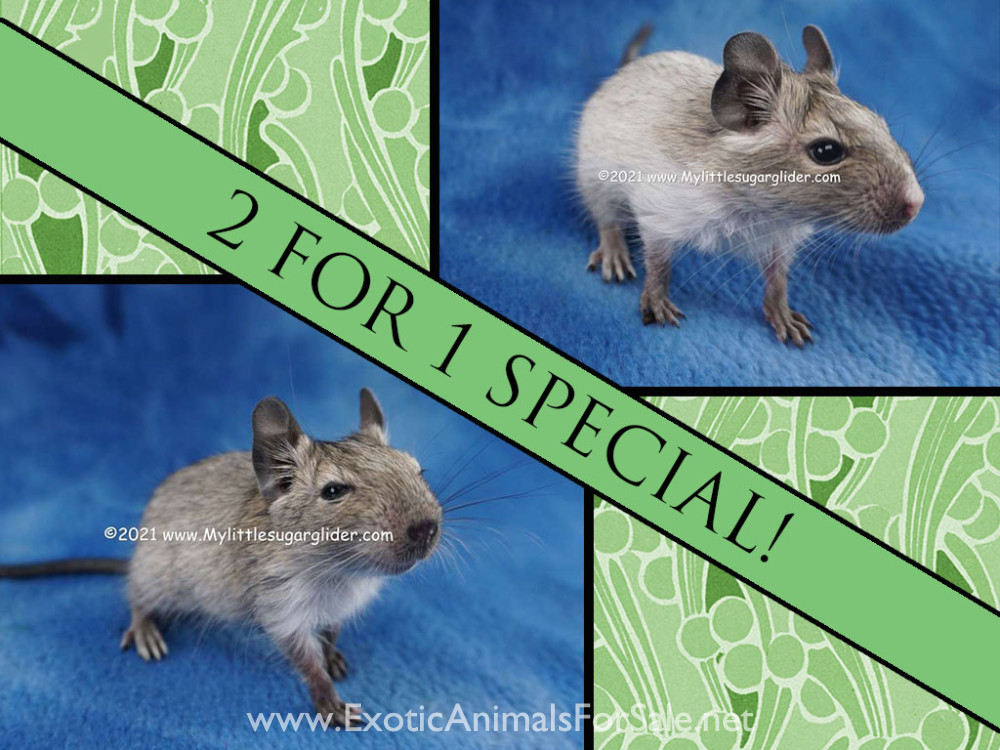 Robin and Barry are both Blue Schecke (Piebald) Male Degu, with a big White Tip. Schecke is a German word meaning “spotted or dappled”. Some also call the color “Pied”. Many of these colorations, have been developed and imported from Europe. They... 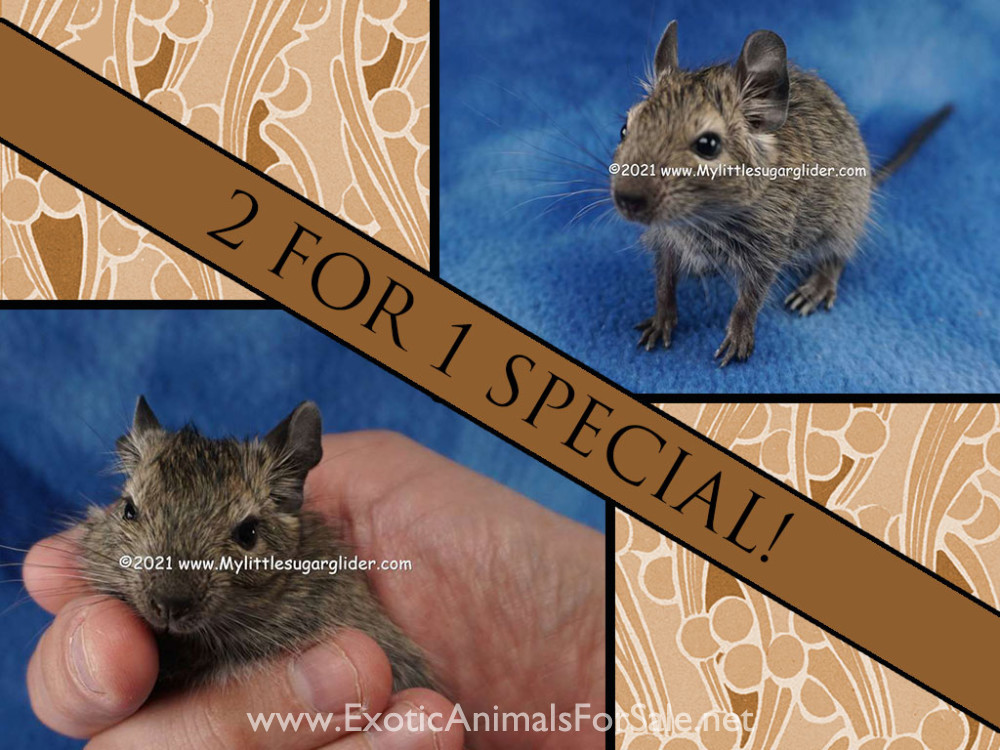 Lions will live in a group called a pride. The pride size will range from 3-30 individuals.

A lion will mature at about 2 years old. Lions will breed throughout the year. The gestation period is about 110 days and the lioness will give birth to 3-4 cubs. The cubs are born helpless and blind. Their coats are spotted. They will exclusively live off of their mother's milk for 2 months and then will start eating the prey that their mother kills. At about 6 weeks, the cubs will leave the den and accompany their mother on hunts. This starts their learning process on how to hunt. The cubs do depend on their mother for food until they start hunting on their own at about 11 months. But they do not have the adult teeth to be able to tear meat. So they still rely on mom. The cub will start killing small prey when it is about 15 months old. But they will still stay with their mother for at least 2 years. AT which time, their mother is pregnant again and the young males will be driven out by the dominant male and the young females may stay with the pride. Cub mortality rate is 80% will not make it to the age of 2 years old. The male lions do not help in raising the cubs. If a male takes over a new pride, he may kill all the cubs from the old male.

In captivity, lions will breed with other species of cats. A Liger is a male lion bred to a female tiger. The liger is the largest cat in the world. They can grow to about 11 feet in length. A Tiglon is a male tiger bred to a female lion. The tiglon is a smaller cat than the lion or tiger. Another hybrid that is uncommon is the Leopon. This is a hybrid of a male leopard bred into a female lion. The leopon is slightly larger than a leopard. There is documentation of these hybrid happening in the wild but the numbers are low.

Housing for a lion in captivity

A lion should have a cage that is at least 20 ft wide by 15 ft deep. The sides need to be at least 16 ft high if no top is on the cage. If you have a top on the cage, it can be 10 ft high. The cage is to be made out of a heavy gage wire. If you are housing more than 1 lion, the cage should be 50% larger for each additional lion. The cage is to include a smaller shift cage that is 8 ft by 8 ft. The shift cage is a place you can close the lion into so you can clean the cage safely. You should provide a raised platform or ledges. the lion will enjoy sleeping and resting on these. Another item to include in the cage is a large log for them to use as a scratching post.

Diet for a captive lion

Whole animal carcasses is the best complete diet. You can feed just muscle meat and supplement the diet with some whole carcasses or commercially available carnivore supplements. Bones should be offered once to twice a week. These will help maintain healthy teeth. Provide fresh water at all times.

Veterinary care for a captive lion

A lion needs annual vaccinations for feline panleukopenia, rhinotracheitis, and calicivirus. Fecal examinations for internal parasites should be done twice a year. And the teeth should be examined yearly. More frequently when older.

Where to buy a lion

Lions can be purchased at exotic animal auctions or from private breeders. Before you buy one, check your city and state regulations on lions. You may have to acquire permits to house one. Also before purchasing a lion, have your cage built, food supply ready and make sure to find a veterinary that will treat your lion. A lion is not a cute pet. They can kill you and require a high knowledge of how to handle a dangerous animal!