Ocelots are a lithe, graceful cat which is native to both North and South America, though they're primarily found in certain South American areas today. The number of ocelots in the wild has dropped far enough that they are classified as animals which are likely to go extinct in the next few generations unless they receive help from mankind. 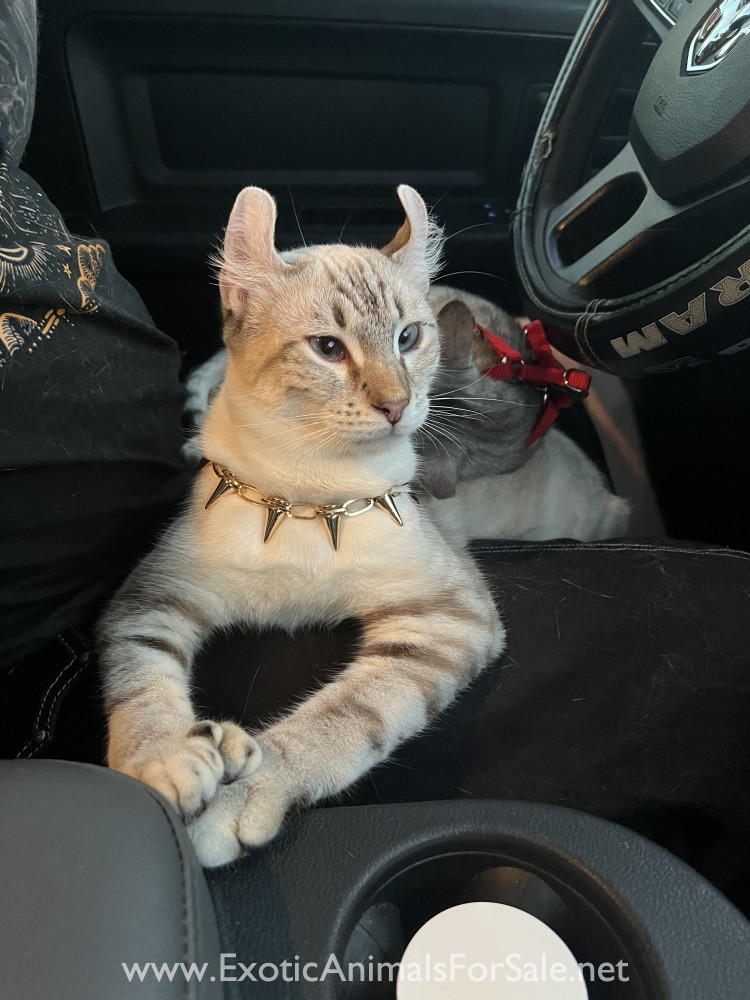 Ocelots can live in a variety of habitats, from arid deserts to lush groves and forests. In fact, the exact hue of an ocelot's coat will depend on his or her natural habitat. Ocelots that live in arid climates will have a lighter coat than those native to heavily forested areas, because it helps them blend in better.

Long ago, the ocelot roamed across North America, South America, and Central America. Now man's encroachment onto the ocelot's habitat and hunting areas has severely depleted especially the North American population. The general ocelot population has also been depleted by trapping them for the pet trade.

The relationship of an ocelot to its owner can often be categorized as the cat owning the person. Ownership of an ocelot puts limitation on the owner's life that a regular domestic pet does not, and a commitment to such a cat cannot be made lightly. As a rule it must be for the life of the cat, and ocelots are known to live into the late teens and even early twenties.

Ocelots are very strong, and this should be taken into account when considering if they are appropriate to your home. The cats are spectacular climbers -- whether it's door frames, bookshelves, or a pant leg. They can leap to impressive heights easily, including refrigerators and heads. Playing with other cats, they're quite rough biters and have a tendency to practice eviscerating their prey using their back legs. If not prevented early, this tendency may translate into their human contact. Similarly, it is very important to teach them beginning in infancy that human hands are never toys. They have great wounding potential, and a simple bite can be a dangerous event.

There are many specific caging needs for ocelots. The cats dig and climb, so fences must be very secure at the bottom and the cage needs to be roofed. Ocelots have stronger jaws even than a pit bull dog, so fences need to be strong enough to safely contain the cat. Seams must also be carefully made because the cats like to find small openings and weak points, then work on them mercilessly.

At the same time, ocelots need enough room to run. An 800 square foot enclosure is enough for one to two ocelots to live happily as long as there is enough enrichment.

Enrichment should keep in mind that ocelots have both arboreal and aquatic interests. They love climbable poles and platforms, and they love water enough that they will dive under the surface completely to retrieve a toy. Appropriate ocelot toys are extremely sturdy, capable of withstanding jaws and claws: boomer balls are a good choice, and they have the additional benefit of floating on water. Any rubber toys (even heavy rubber ones like Kong toys) should be only used with supervision initially, since ingested rubber may cause blockages and choking.

What does an Ocelot Eat?

Ocelots have similar dietary needs as other cats. It should be well-rounded if they're to remain healthy. Like any cat, they need a good balance of organ and muscle meats, plus plenty of calcium and taurine. Overall they cannot be fed "cat food" and there are few suitable manufactured diets, they must generally eat raw meat.

In nature ocelots mostly eat nocturnal rodents, such as rats, mice, armadillos, and opossums. They can also take larger prey up to deer and lesser anteaters, and sometimes they can take reptiles and birds. However, most ocelot prey weighs less than 3% of the cat's body weight.

Owners of endangered species like the ocelot have other considerations beyond their relationship with the cat. Selective breeding can be necessary to maintain the species, so it's not necessarily the best idea to neuter the animal, yet owners of breeding cats should be prepared for often dramatic changes in behavior towards people once the animal is paired with another.

Many ocelots will be less affectionate with humans once they've been paired with another cat as a mate. Female ocelots in heat, in particular, can be nerve-wracking sights -- rushing here and there, constantly growling, rolling on everything. Males tend to become stand-offish and less affectionate once a pairing is established.

While hand-raised ocelots may allow people to visit infant kittens while nursing, those which were not hand-raised are usually quite defensive about their young.

Few kittens are cuter than an ocelot baby. As a young kitten they remain longer with their mother than other wild cat species, and tend to follow their "mom" (whether feline or human) closely. Some demonstrate a strong need for attention.

Ocelots tend to like experiencing life orally. They chew or suck on many fabrics and textures in order to experience them. A number of hand-raised babies learn to equate attention with finger-sucking, which can lead to problems later.

Carefully raised ocelots can be very affectionate. They are very active and playful, and many will keep playing with balls or ropes as long as they can convince the person to keep playing.

At the same time, ocelots can be quite dangerous if they attack. Ocelots tend to target the groin, neck, armpits, and insides of elbows, where a single strike will open major blood vessels. They also tend to strike again if deflected. Ocelots similarly do not deal well with visitors or other animals living in the house.