Pandas are a native of China and are known for being a bear with cat feet. The history of Pandas in captivity began in the 1970's when they began to become extinct after being hunted for their incredibly soft fur. As the 1970's continued, Pandas became a more popular animal to host, as the population slowly grew through national news. According to recent studies, there are currently 239 Pandas being held in captivity in their native home of China and 27 other countries. 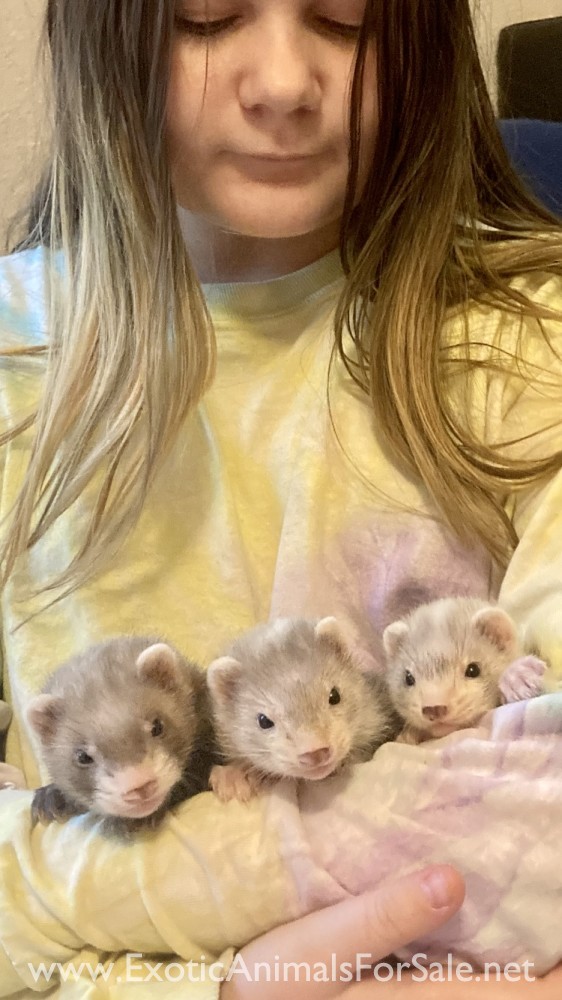 8 week old baby ferrets. $300 each. Pick up only in Saint Augustine, Florida. NO SHIPPING. 3 females, and 2 males available. They are siblings. These are NOT Marshall’s, we are a private breeder. They are being sold INTACT. If you buy a female as a p...

Housing a Panda in captivity requires a lot of space. Since most animals are creatures of habit, they need to have housing in captivity that mimics their natural habitat. Pandas are known to climb trees so if you are going to create housing for a Panda in captivity, you are going to have to make sure there are plenty of trees. They also enjoy hiding when they sleep, since they don't hibernate like other bears, they need to get their sleep in order to be healthy. So not only will it be important to have an environment of trees, it will also be important to have rock structures for the Panda to hide in. These gentle bears enjoy spending just as much time in the open as they do relaxing in seclusion, so it is important to have a habitat that is going to allow them to enjoy these same luxuries they would if they were living in the jungles of China.

What do Pandas eat

One thing that sets Pandas aside from other bears is their diet. Most bears eat both meat and berries, where the Panda has a diet that is majority herbivorous. 80% of a Pandas diet is made up of bamboo. A Panda that is raised in captivity will slightly differ from a panda that is wild because of hunting habits and food availability. Studies have shown that Pandas that live in captivity have more fruits and vegetables in their diet due to the availability of these foods. Captive Pandas will continue to keep majority of their diet as bamboo, but the additional nutrients proves to be beneficial to them.

Just like any animal, it is important that Pandas receive regular veterinary care. Since Pandas are on the endangered species list, it is crucial that they are kept in the best health possible. If a Panda is living in captivity, they should receive regular vet visits to make sure they are at their best health and to be able to detect any problems that may occur. If a Panda is showing signs outside of their normal behavior, it could be an indicator that the Panda is ill and should receive treatment immediately to prevent the illness from getting worse.

Another type of subspecies of Panda is called the Qinling Panda. This type of Panda was discovered in the 1960s, but was not classified as a subspecies until 2006. It took time to classify subspecies, because it has multiple qualities that make it differ and could possibly be mistaken as a Red Panda, which shares the name, but not many qualities. The Qunling Panda is from the same family as Giant Pandas, however; has a smaller skull structure. Another difference is the coloring. Traditional Pandas have a black and white coloring, but Qinling Pandas are known for their brown shadings. They also tend to be smaller in size compared to other Pandas.

Pandas are one of the more beautiful creatures in nature that are the most gentle bear out there. It would be no surprise that someone would want to own one of these beautiful creatures, especially since they were added to the extinct list. Since these animals are on the verge of extinction, not only has owning one become more desirable, but their care has become even more important if they are owned. Without the proper habitat, diet, and veterinarian care, a Panda can not survive in the wild or as a pet. Though these factors are important if you want to own a Panda of your own, one of the most important things someone can do is educate themselves. They have grown to be one of the most popular captive animals in a zoo because zoos have an understanding of the species and the responsibilities that come with having them and why it is important to preserve their species.3