Sloths are mammals that are native to the tropical regions of Central and South America. A distinguishing characteristic of the sloth is their long claws that they use to cling to tree branches and to reach leaves. These claws, however, are so long (3 or 4 inches in length) that the sloths find it difficult to walk on the ground. As a result, they spend most of their time in trees. There are two categories of sloths, two-toed sloths and three-toed sloths. The two types are similar, but the three-toed sloth has a mouth that is shaped in a permanent smile and they can turn their heads nearly 9- degrees. Today, sloths are roughly the size of a medium-sized dog…about 25 inched and 18 pounds, but there is fossil evidence that sloths in ancient times were much larger, about the size of an elephant!

Beautiful young female sloth we have been calling Lulu! Eating extremely well, great personality, vet inspection/health certificate will come with anyone purchasing her. We are a licensed facility with USDA, and FWC. All of our sloths will come w... 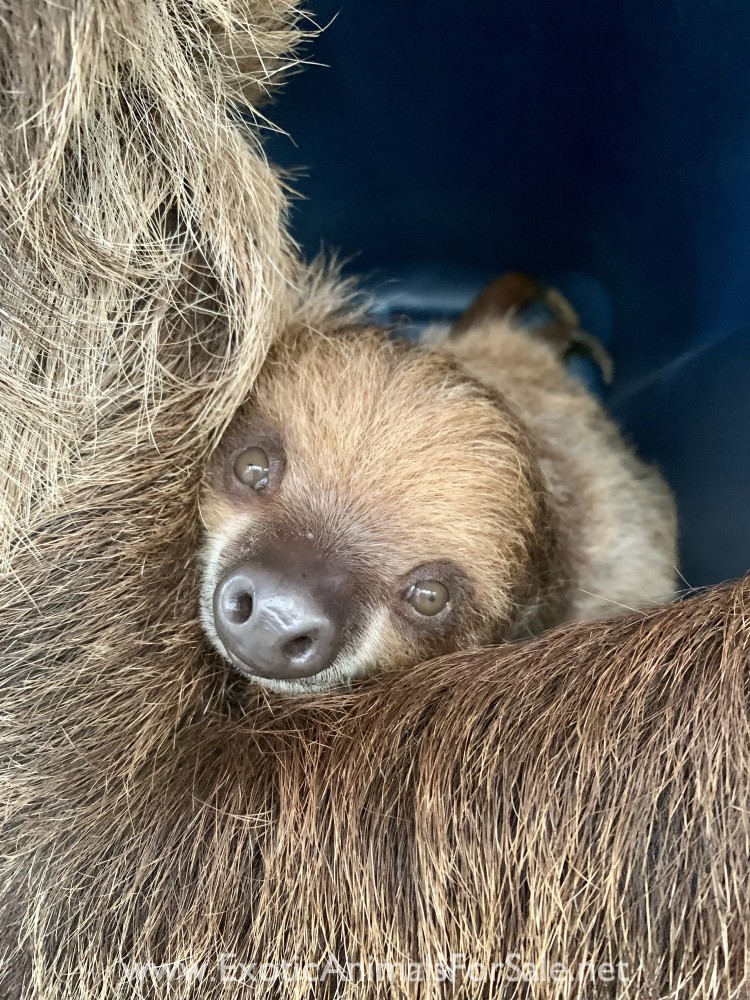 Adorable baby 3-4 lbs. Still on the mom but eating some solids on its own. Come see us in south Florida! Local pickup or shipping is available. We are USDA, FWC licensed and inspected for over 25+ years. Free vet checkups for all locals. Call or ema... 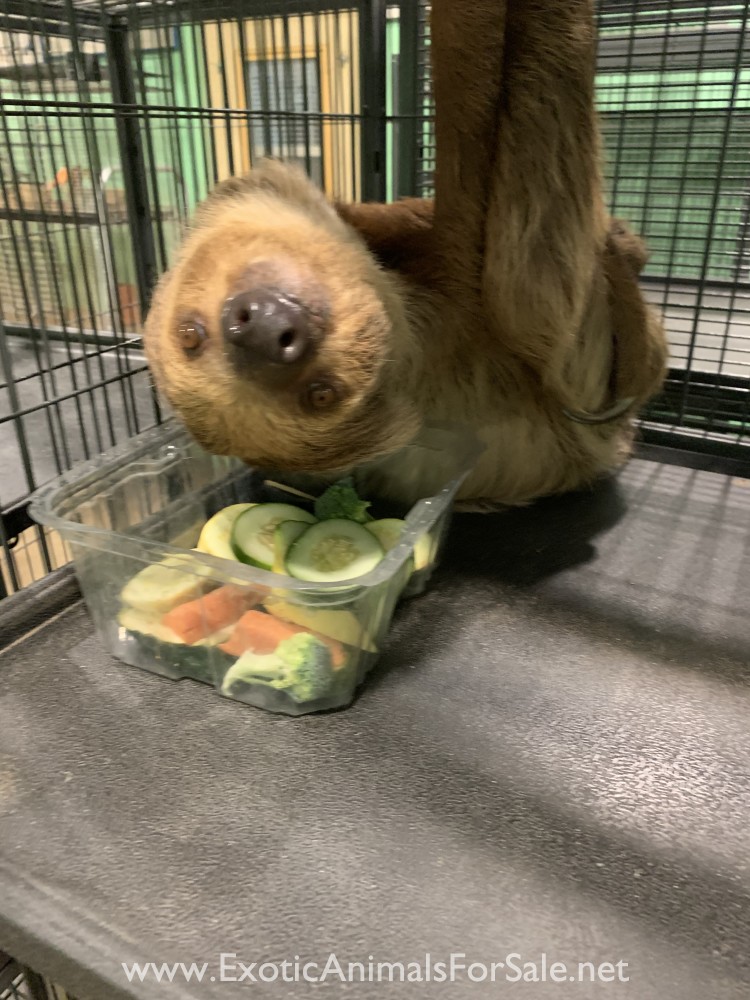 We have a couple of yearling and adult sloths ready to go. Doing n eating great also dewormed. Please contact us for more info. Thank you for Your time & Business, World Exotic Inc. USA 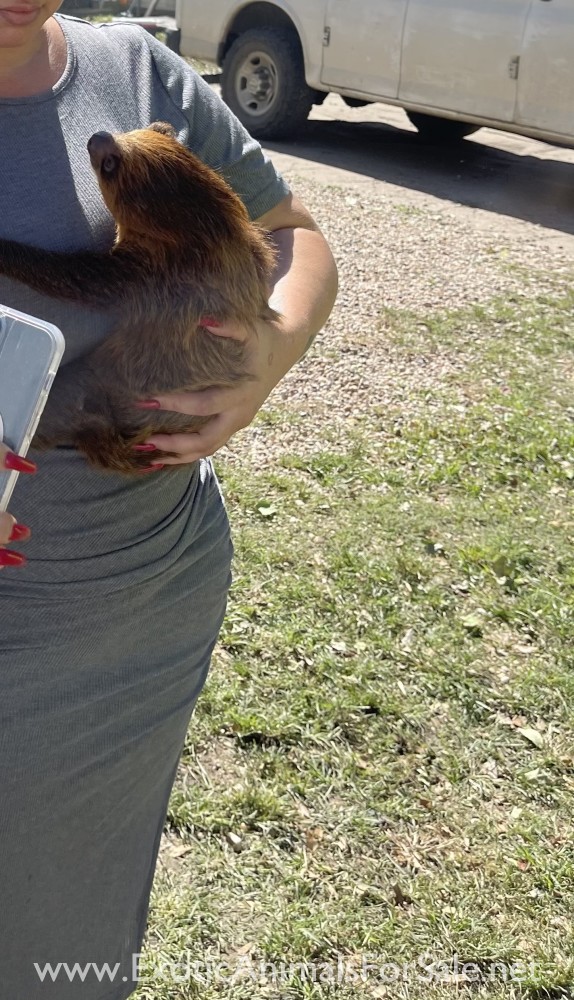 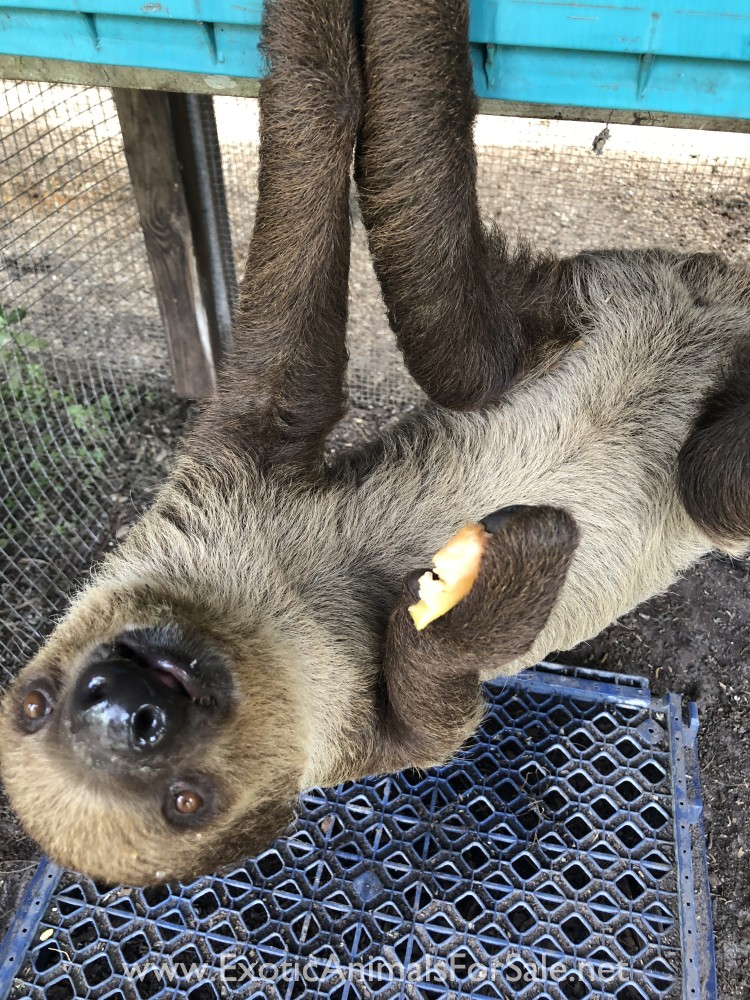 We have a couple of yearling sloths ready to go. Doing n eating great also dewormed. Please contact us for more info. Thank you for Your time & Business, World Exotic Inc. USA

Please feel free to email for further details. She is a great educational animal. She allows you to pet her while she is eating.

Sloths are found in the tall trees of the tropical rain forests and cloud forests of Central and South America. They spend the majority of their time in trees, even sleeping curled up in the crook of a tree. The only time they venture down from the trees is to relieve themselves or to swim. An enclosure for sloths in captivity should emphasis vertical space more than floor space, with ample trees and branches for climbing.

Although sloths have four-part stomachs to help them digest the tough leaves that make up the bulk of their diet, they are slow digesters. It can sometimes take up to one month for the animal to fully digest one meal. The leafy diet that the sloth eats is relatively low in nutritional value so the animal doesn't derive much energy from their food, which may be why the animal moves so slowly.

A sloths life revolves around eating and sleeping. In captivity, sloths will sleep 15 to 20 hours per day, which leaves little time for enrichment activities. In the wild, the animals sleep less. They are not very social animals and prefer solitude. Aside from climbing, the only activity they engage in is swimming, so sloths in captivity would benefit from pool time.

Sloth courtship starts when a female screams a mating call to let any male in the area know that she is available for mating. Mating and birth both take place in the trees. Sloths give birth to just one baby at a time, after a gestational period of between six months and eleven months, depending on the species. The babies stay with their mother for up to four years and ride around clinging to their mother's belly for weeks after birth.

A sloth is a mammal that weighs from 7 to 19 pounds and found in the rainforest of Central and South America. Their length is from 18 to 34 inches. A sloth has long coarse hair and moves very slow. Due to their slow movement, they will have algae growing on their fur. The algae will tint their, grayish brown, coat green. They hang from tree branches by their long hooked claws. Some species are only active at night while others are active day or night. Sloths have a very slow metabolism and the lowest mammal body temperature. Because of this, they do not need to eat a lot. Their diet includes leaves, fruit, tree buds and young twigs. Also to help reserve energy, they will sleep about 18 hours a day. They will sleep hanging upside-down from a branch. Also the sloth has the lowest muscle to mass ratios of all mammals therefore they are unable to shiver to keep warm. The sloth will descend from the trees about once a week to defecate and urinate. They will dig a hole first and then will fill it back in when done. When on the ground the can be very clumsy but are great swimmers.

A sloth can live up to 30 years and only the two-toed sloths do well in captivity. The three-toed sloth does not.